Super Bowl, Ben, and the Bone

I must draw your attention to an excellent Washington Post column written by Fort Worth native Sally Jenkins. It’s about the Super Bowl in Arlington. She mentions the plans to set the attendance record and the fiasco with the seats and the obscene prices of parking spots and nachos. But it’s not just about that. Her article is so much bigger and better than that. She claims that this Super Bowl at Jerry’s Place was, for her, the tipping point. This was the last straw. This was absurdity beyond belief. Beginning with the stadium itself:

It’s the cleanest, safest, nicest stadium anyone has ever visited. It is also the most extravagant and economically stratified. It cost double what Jerry Jones said it would, and taxpayers financed about a quarter of it, yet its innermost marble interiors are totally inaccessible to the average fan.

Jenkins cites the four Navy F-18s that flew over the stadium at the end of the National Anthem — over the domed stadium. At a taxpayer cost of $450,000. She observes that the state of Texas spent $31-million to host the football game while, at the same time, desperately making historic cuts in public education. Five thousand fans paid $200 each to stand in the rain in the parking lot! It’s just too much:

In the end, this Super Bowl taught me a lesson: Luxury can be debasing.

I’m telling you, it’s an excellent article. You can read the whole thing by clicking here.

I’m leaving Sunday afternoon for Searcy, Arkansas to spend a couple of nights with my brother and his family. The ocassion? A full day on Monday with New Testament scholar and theologican Ben Witherington III. (Carley claims that’s a made up name.)

Witherington has written more than 40 books, including an excellent commentary on Revelation that we used as a textbook at Austin Grad. I had the great pleasure two years ago of attending three of his lectures on Revelation at the Austin Grad Sermon Seminar. He paints beautiful pictures with his words. He speaks big. Very big. Grand. He’s an orator of the highest class. A brilliant  and complex man who might even break out into song in the middle of a speech to illustrate a point. And now Harding’s College of Bible and Religion is bringing him in to lecture on the topic of Christian ethics. Witherington’s just written an 1,800 page, two volume book, The Indelible Image, about the relationship between theology and ethics in the New Testament. Three seminars, a Q&A, and a roundtable discussion await us on Monday. I’m hoping Dr. Keith Stanglin is able to get me a seat at the private dinner with Ben before the final session. 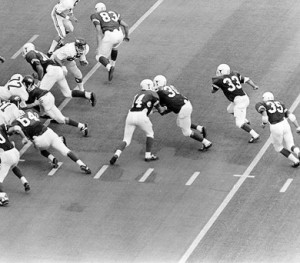 Texas Longhorns offensive coordinator Emory Bellard drew it up on a napkin while he and Darrell Royal were having breakfast in an Austin diner in the summer of 1968. A brand new formation that included three running backs, a running quarterback, and offered them up to four or five options on every play. He called it the Wishbone. And it revolutionized football.

Royal used the wishbone to win the national championship in 1969. Bellard used it as a head coach at Texas A&M and Mississippi State. He beat Bear Bryant’s Crimson Tide with it and won a few conference titles, too. Won three state championships coaching high school ball, too.

After football, Bellard retired with his wife to a life of golf and fishing in Marble Falls. I 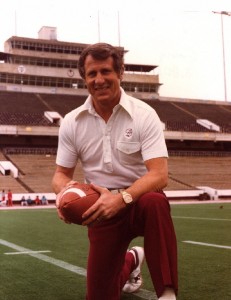 met him in 1992. He was our backup color analyst  for the Mustangs high school football games on KHLB Radio. I worked two games with him in the booth. He was also the backup PA guy. When Dick Barkley, the legendary feed store owner, couldn’t make it, they called Emory. I had Emory on my talk show in Marble Falls several times to talk Longhorns and Aggies. He knew everything. All the history. Shoot, he WAS the history! He knew everybody — not because he called people and kept up with them, but because everybody called him and kept up with him. Extremely gracious.

Many times I called him to get some insight into a news story. When Chan Gailey was hired as the Cowboys coach in ’98, it was Emory who gave me the scoop first and then hooked me up with one of Gailey’s old high school girlfriends from Americus, Georgia. She, in turn, faxed me several pictures of Gailey from their high school year book and articles he had written at that time for the high school paper.

Helpful. Humble. Very “aw, shucks” about his place in football legend and lore. Generous and giving. What a great guy.

He died yesterday at 83. A great man. I was always proud to say I knew him. God bless his sweet wife, Susan.