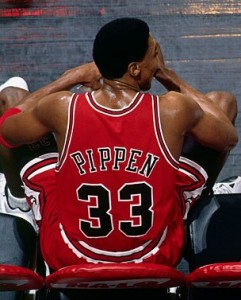 In 1994, the Chicago Bulls and New York Knicks were tied at 103-103 in Game Three of the Eastern Conference Semi-Finals. There were 1.8-seconds left. Bulls coach Phil Jackson called time out and drew up his team’s last play, designed to get Toni Kukoc the final shot. Chicago forward Scottie Pippen didn’t like it. He wanted to be the focus of the play. He wanted to take the last shot. He barked at Jackson. The coach barked back. And then Pippen slammed himself into a seat on the bench, refusing to take part in a play that didn’t center on him. The team needed Pippen out on the floor. It was critical that Pippen draw the attention of New York’s defenders so Kukoc could get a good look. But Pippen refused. He sat on the bench and pouted as Kukoc made the game-winning shot.

In July 1999, the Detroit Lions were counting on league MVP Barry Sanders to remain the center piece of their franchise while they built around him and new quarterback Charlie Batch. The Lions had made it to the playoffs four of the past six seasons, including a conference championship game appearance in ’91. And Sanders, regarded by most as the game’s best rusher, was in his prime. But one day before Lions training camp was to begin for the ’99 season, Sanders quit. He quit. He faxed a retirement announcement to his hometown newspaper in Wichita. He was done. One day before training camp. No reason given. No explanation.

February 2011. Eight days before Texas Rangers pitchers and catchers report to Surprise for spring training. Four days after General Manager Jon Daniels and team president Nolan Ryan tell the newspapers they’re set for the season. Third baseman Michael Young has been moved to the full time DH spot to make room for Adrian Beltre, a clear upgrade at the crucial corner. The plan is for the aging Young to DH and play a “super utility” role. He’ll hit every day and fill in at each infield position when they need him. Young’s versatility is invaluable. His clubhouse leadership is critical. The Rangers are coming off their first ever appearance in the World Series and they believe they have the team now to take that next step and win a championship. But now Young has demanded a trade. He’s forcing a trade. He’s publicly characterizing Daniels and Ryan as less-than-honest. He’s telling the media he’s been cheated and lied to and he’s not going to play here anymore.

I love Michael Young. But this is high treason. This is selfishness of the highest order. This is quitting on your team. This is demanding your way and your will over what’s best for the group.

Two years ago the Rangers, in a gracious act of loyalty and appreciation, signed Young to an incredible five-year, $80-million dollar extension, the second-largest contract in franchise history. The move was universally blasted by experts as unnecessary and foolish. Young was 32-years-old! But the Rangers wanted to show their gratitude to the man who’d been there through thick and thin, who’d sacrificed so much, who’d played so hard, and who’d turned into such a valuable team leader. They wanted to reward him. So against better judgment, they did.

And eight days before spring training, with the roster completely set, Young has quit on the Texas Rangers.

They asked him to play a different role. Not a less important role. A different role. To make the team better. To get all of them to where they all so desperately want to be.

I would expect this kind of attitude from 99-percent of the professional athletes out there. I would have never expected this out of Michael Young. I’m very disappointed. Sad, even.

I don’t know how this is going to turn out for Texas. Nobody’s going to want to trade for a 34-year-old below-average-defensively third baseman. Not at those contract numbers. Young ripped the rug out from under the Rangers. This is a sucker punch. If the Rangers do manage to trade him, they’ll wind up paying a big chunk of his salary. That’ll be bad. If somehow things get patched up and Young remains in Arlington, that’ll be even worse. He’s not your clubhouse leader anymore. He publicly insulted team management.

He quit on everybody.