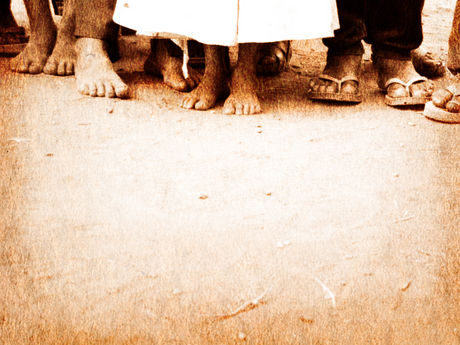 For the past several years it’s become clear that the word “evangelical” has very little, if anything, to do with Christianity or religion. It’s not a Christian term anymore. It’s been misused and redefined by the politicians and media in the United States for so long now that it’s become a purely secular word. A national political term.

One of the more obvious manifestations of this is in the way African Americans are left out. Have you noticed that the media will not refer to African Americans as “evangelicals?” Christians of color may have a high regard for the Bible, they may focus on the atonement of Christ through the cross, they may be committed to proclaiming the Gospel, they may believe the Gospel changes lives and changes the world — they may embody every facet of the classic definition of “evangelical.” But because African Americans vote heavily for Democratic candidates, the media will not call them “evangelicals.” The term is strictly political now. “Evangelical” means Republican. “Evangelical” means guns and lower taxes and immigration reform and repealing Obamacare.

There are a lot of reasons this matters so much. One of the main reasons is that our young people now identify traditional Christianity with right wing American politics. This development has been analyzed and discussed in every “unchristian” and “You Lost Me” type of book that’s been written in the past twenty years. Young people are not leaving the Church because they reject Christ Jesus as Lord, they’re leaving the Church because they reject the national politics that appear to go with it.

That’s a problem for all of us. Whatever our national political beliefs and practices — left or right, Democrat or Republican, conservative or liberal — they shouldn’t be wrapped up in God’s Church because they all eventually come into conflict with God’s ways. And our young people see right through it.

I was privileged to be in attendance at Hope Network’s Preacher Initiative in Dallas last month when Dr. Mallory Wyckoff delivered a powerful sermon on the disconnect between what we teach our young people in our churches and what they actually experience in and through us who do the teaching. Her sermon was gut-level honest and penetrating. Eye-opening. Inspiring. The language soared and the message cut straight to the heart of the Gospel.

Mallory has graciously provided me with a manuscript of her sermon, “Where You Lead I Will Follow” from Matthew 23. You can find the entire sermon posted to her website here. But I’d like to share a couple of excerpts in this space.

Mallory began by praising the church and the church people who raised her in the faith. She expressed her admiration and love for those men and women who shaped her as a child of God.

“To be sure, I was loved. I was loved really well. I was made to believe that I had worth, that I could pursue the dreams that surged within, that God would guide me as I took each clumsy step. I was nurtured in the Christian faith from the womb, loved and cared on by my community, educated in their schools, formed in their churches. I attended their youth groups and summer camps, wore their T-shirts and sang their songs. These people invested in me, gave of their time and resources to help me grow into the woman I am now. For all of this and for more, I am grateful.”

“[I] observed that Jesus seemed to care an awful lot about the poor and marginalized, giving them food and dignity, binding their wounds and healing their bodies. But when I named the gross inequities between the rich and poor in our country and asked what we might do to overcome this, they called me a socialist…

They told me about the cross of Christ and insisted this was a central feature of our faith. So I spent time reflecting on the cross and observed it as the culmination of Jesus’ consistent refusal to employ violent means. I took to heart his teachings that the swords we live by surely are the ones by which we will die, that we are to love our enemies and, perhaps, this might mean to not kill them. I wondered how I could follow this Christ with any integrity in my heart if I also carried a gun in my hand or on my hip. But when I asked my church about these things, they told me this was unrealistic, that Jesus’ teachings are for individuals but have nothing to say to nation-states, and that I should fear the nation-state taking from me the very weapons Jesus warned against.

They took me to the baptismal font and buried me with Christ beneath the waters, calling on me to live into the newness of life in Christ, proclaiming that my identity is found therein, and I swore my allegiance to Christ. But when I began asking about all of the myriad allegiances we seem to hold in conflict with the lordship of Christ, that perhaps nationalism is the most dangerous kind of idolatry, they told me I was not a good patriot.

They taught me about the early church, a marginalized sect seeking to live into the Kingdom in the midst of empire. They told me stories of the church’s courage, even in the face of persecution and death, and of their commitment to the way of Christ. But when I began wondering about how the empire in which we find ourselves dehumanizes black and brown bodies, they told me I didn’t show enough respect for the flag and for country and for every other symbol that bears Caesar’s image even while the body count for image bearers of God keeps climbing…”

Mallory’s critique comes straight out of Scripture, directly out of the prophets’ mouths and our Savior’s heart. She articulates so well what stirs my own soul and what burdens my shoulders and my mind, but what I have such difficulty describing. She perfectly says what I’m thinking.

Our priorities are out of whack. Our identities are compromised. We’re seeing issues to be argued instead of people to be loved. We think first as Republicans or Democrats, as political conservatives or liberals, and not first as disciples of Jesus. Our positions are solidified and our decisions are made through the lenses of our race, our zip code, our political affiliations, and not first and foremost by our identity as baptized followers of the Christ.

The younger generations coming up behind us see it. And they feel it.

You already know my position on all this. The United States is not going to be changed by votes or parties. It’s not going to be saved by force of numbers or force of rhetoric. It’s going to be saved, along with the rest of the world, by Christ Jesus. And his way is about love and forgiveness, sacrifice and service. And peace. Our Christianity should be defined by those things. Our congregations should be characterized by those things. Our young people need to see that in us first. And last. And every place in between.

Mallory ends her sermon with a genuine humility and grace that are sometimes missing from mine. She expresses her deep love for the ones who’ve gone before and she confesses that she is no better. She sees the hypocrisy and duplicity in her elders, but is self-aware enough to know she’s capable of the same missteps.

“I am neither different from nor better than the ones who taught me to follow Christ and dismissed the places he took me. Like them, I say one thing and do another, unaware of the ones who suffer because of my ignorance. I tell [my daughter] to follow Jesus no matter where he takes her, even and especially when it’s a path I reject or dismiss. I tell her that she will have to differentiate between the heart of God and the ways I do or do not reflect this God. I tell her to follow Christ, wherever he may lead. May we have the courage to follow him, too.”

Thank you, Mallory, for these challenging words. Thank you for your boldness and your grace. May our God bless us all to see more clearly and to follow more faithfully.