I’m not concerned about the politics of the U.S. president’s speech yesterday related to moving the American embassy in Israel to Jerusalem and declaring that city the eternal capitol of that nation. Frankly, I don’t understand the politics. Why does the U.S. insist on being so tangled up with Israel? Is it oil interests in the Middle East? Is it the money from Jewish-Americans who bankroll the re-election campaigns of the politicians? I don’t get it and it’s not my concern.

I’m also not concerned about the distorted theologies out there claiming that if the U.S. looks out for Israel and protects Israel and pursues the political purposes of Israel, then somehow God above will smile on America and we’ll all prosper and maybe Jesus will return. I don’t get it. The promise in the Torah is clear, from Genesis 12 on, that God’s salvation is for all nations, that the Lord is interested in rescuing all peoples. The New Testament tells us over and over again that the Church is Israel, we’re grafted in. It’s bigger than man-made boundaries and worldly politics and armies. The Church is the political entity; our citizenship is in the Kingdom of God. Our Lord is gathering all people to himself in Christ Jesus. He doesn’t love or favor any one nation or people any more or any less than he does the people of Israel.

My concern today is with the people I know and love in that great land. 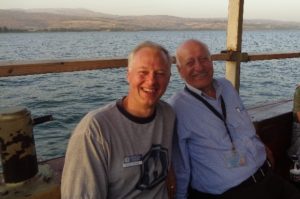 I emailed Anton Farah yesterday, a little ahead of the anticipated violence that has resulted from the U.S. government’s move. Anton is our faithful guide when we take our every-other-year trips to Israel. Anton led 15 of Bill Humble’s 20 trips to the Holy Land and blessed me by introducing me to his dear friend and guide. Anton was born and raised in Nazareth, a Palestinian and a Christian; a wise and humble man, full of grace and dry humor, brimming with knowledge and strength, full of God’s Holy Word and God’s Holy Spirit. I love Anton and his wife and sons.

He emailed back that he’s in the middle of a seven day tour and is scheduled over the next four days to be in the West Bank, Jericho, Hebron, Arad, and Shechem. He expressed gratitude for the prayers and well wishes and told me he is also praying that there will be safety and no troubles. He’s not scared. He’s been through much worse. He thinks and reacts on a much higher plane.

I’ve been checking in on the violence and protests throughout the day. The pictures and videos of protestors starting fires and throwing rocks and the Israeli police answering with tear gas, rubber bullets, and stun grenades are unnerving. It’s so sad. And dark. I don’t have a full grasp of the complicated politics — I’m not sure anyone does. I don’t understand the misguided theology — it’s wrong. But I do know some of the people in Israel — people on both sides of the ancient conflict — and I love them. And God loves them. All of them.

We’re scheduled to take a group of 32 to Israel the first week of June this coming year, the largest group I’ve ever led to the Holy Land! My middle daughter, Valerie, is making her first trip with us to Israel and I can’t wait for her to meet Anton and Kando and Shipley and all the beautiful men and women and children of that country. I can’t wait for her to see and experience all that our God has done and is doing there.

I’m a little concerned that the date for the next signing of the waiver that keeps the U.S. embassy in Tel Aviv is scheduled for that same June. Whether the American president signs the waiver at that time or chooses to actually move the embassy — either way — I’m worried that it’ll spark more violence and our trip will be in jeopardy. I hope not.

In the meantime, I would ask you to pray for the people of Israel. Don’t spend a lot of time praying and talking and tweeting and texting and forwarding emails about the politics or the theology of the current situation over there. Pray for the people. Think holy thoughts about the men, women, and children in Israel.

Pray for peace — not peace on U.S. terms, not peace according to your political party’s definition, not peace that’s brought about by threat and force. Pray for the eternal peace of Jesus Christ, his will, in his way, in his timing, to his glory.