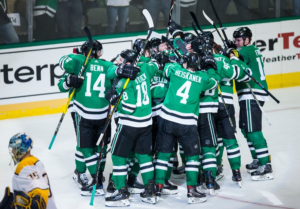 Few things are as thrilling in sports as a tied NHL Stanley Cup playoff game in the third period.  Only overtime. And the Stars outlasted the Predators Monday night in an edge-of-your-seat overtime slugfest to advance to the second round. My heart has just now this morning returned to its normal rhythms. Overtime in an NHL playoff game is the only true “sudden death” in sports. And it’s incredible.

One of the great things about a Stars game on TV is the running color commentary provided by Daryl “Razor” Reaugh. Every 90-seconds or so during every single game, Razor says something that makes me giggle. The guy’s a genius. Monday night he referred to the Stars’ six-foot-seven goalie Ben Bishop as the “net-minding mastadon.” After a wild flurry of saves late in the second period, Razor called Bishop a “brilliant rubber regurgitator.” He described a save by Nashville’s goaltender as “a sassy glove grab.” When the game was over and the American Airlines Center crowd was celebrating the series win, Razor reminded all the TV viewers back home that “the singular of confetti is confetto.”

Their second round series against the Blues begins in St. Louis tomorrow night.

(Sometimes we gripe when the wind blows in Amarillo. Let’s be honest.)

Scripture tells us plainly that, for children of God and disciples of Christ, the primary command is to love. From the Old Testament law and prophets to Jesus and his apostles, loving other people is the primary response and the natural reflection of God’s love that’s been so undeservedly showered on us

According to the Bible, if you’re not a loving person, you don’t know God. If you’re not showing love to others, you haven’t truly received God’s love for yourself.

Nobody in the world will listen to you talk about God if they experience you as an unloving person. You’ve got no credibility. It’s obvious you don’t know who you’re talking about. At Texas Dodge, they don’t let their salespeople drive Fords or Chevys. The president of PETA doesn’t run the membership drive for the NRA. And you’re not going to influence anybody for Christ if you’re not a loving person. You’ll push people away.

The Church is fractured and our witness to the world is compromised because we keep getting this one thing out of order. Instead of loving first, we judge first. We condemn first. We yell first. We whine and complain first. We forward the email first. We insult first, and then love comes somewhere after that. It’s out of order.

We put socioeconomic boundaries first. We put racial differences first. We prioritize parties, platforms, and politicians. We make denominational distinctions primary. We figure out our theology, doctrine, and church structures first, then decide later where, when, and how to show love.

Yes, there are difficult passages in the Bible that must be figured out and there are parts of Scripture about which followers of Jesus can legitimately disagree. But the command to love as the most important command and the one that trumps all the other commands is not one of them.

The apostle Paul tells us that a Christian who doesn’t love is like “a resounding gong or a clanging cymbal.” Eugene Peterson’s Message translates it “the creaking of a rusty gate.” Someone else might say “fingernails on a chalkboard.” In other words, a Christian or a church like that is irritating. It gets on people’s nerves. It’s outwardly obnoxious.

If love doesn’t come first, if love is not the origin and the energy behind and through what you’re doing, it’s not good. A Christian or a church that prioritizes love over everything else fills the world with the hope and healing and joy of our Lord. Without love, a Christian or a church is a tree that bears no fruit, a cloud that produces no rain. Obnoxious.

This is a critical time in the Church. Theologians, historians, and sociologists have been telling us for four decades that we are going through the greatest transition in the last 500 years of Church history. And what you do matters. It matters to you and your family, it matters to your friends and your city, it matters to this country and to the whole world.

Anger is acceptable now in our culture, but that’s not who you are. Discord and division are society’s tools, but not yours. The culture encourages you to look out for yourself first, but that’s not proper for Christians. Asserting myself, my rights, and my personality is not my priority as a follower of Jesus. We don’t go along with the world on this. We don’t say, “Well, that’s just the way things are.” To somehow justify not loving other people, no matter the reason, is to squash our creativity and insult God’s grace and ignore the command of Jesus.

No person in the world who runs into a Christian should ever have to wonder if that Christian is a safe person who will love them. No server at a restaurant, no teller at a bank, no classmate at your school, no neighbor on your street, and no member of your church should ever spend one minute wondering if love has disappeared from the earth. People who run into you, people who experience you, should believe in love.