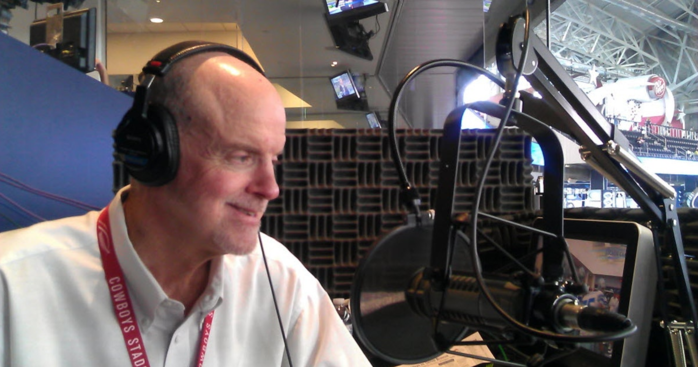 I remember the very first day I met Roger Emrich. It was the spring of 2001. I had been hired as a sports reporter/anchor at KRLD by General Manager Tyler Cox. Ashley Ernisie, the Sports Director, was walking me around the Ballpark studios. We turned a corner from the newsroom, walked right into the group of sports cubicles, and there he was. Bigger than life. Tall and broad and a little too round. Huge smile. And that incredibly beautiful and booming baritone voice that I had been listening to for over a decade.

We casually throw around the term “radio voice” way too much. If there were ever the true model for what it really means and really sounds like, Roger had it: the “radio voice.” My goodness. He defines it.

My first paid radio job out of college was at tiny little KGRO-KOMX in Pampa, Texas in the fall of 1989. I was spinning Contemporary Hit records in the mornings and calling Panhandle Panthers football and Pampa Harvesters basketball games at night. We were a Texas State Network radio station which meant that we aired TSN newscasts at the top of every hour and had access to their sports reports and other special programming. That’s when I first heard Roger’s amazing voice. He was the Austin bureau chief for TSN, covering the Texas Legislature and politics for the statewide network. Every single day there were two or three Emrich stories in our newscasts and he would end every one with that voice: “Roger Emrich, TSN News!”

When I became the News and Sports Director at KHLB AM/FM in Marble Falls in 1991, we were also a TSN station and Roger’s voice filled up our airwaves. Roger’s voice, like all the TSN voices, was heard on hundreds of stations in every single county in the Lone Star State. But his voice stuck out. Goodness gracious, that voice. He moved to the sports side in 1993 and I carried his Cowboys updates and his Rangers post-game reports and his Southwest Conference and Big 12 Conference football previews for our listeners in Burnet and Llano Counties. He seemed to be at every game and every practice for every college and professional sports team in the state. I listened to and envied Roger’s voice for a dozen years.

And then, by the grace of God, I wound up walking right into Roger’s cubicle at the KRLD/TSN studios at the Ballpark in Arlington as a co-worker, a colleague at a heritage radio station in my hometown of Dallas.

And now I know first-hand what everybody who’s ever worked with Roger knows: that full and booming voice could only come from a heart as big and full as his.

One of the great blessings of my mediocre radio career was working every day and a lot of nights with the Raj Mahal. It was a little less than four years, but he made every day such a tremendous joy. Professional, hard-working, detailed, warm, and really funny. Roger’s whole world revolved around great food, classic rock, his family, and Dallas sports. And for almost four years he included me in all of it.

He embraced me immediately as a co-worker, just like he did everybody. When I ran a little long on a sportscast or a TSN update, he’d holler at me, “Tighten it up, King!” He called everybody “King.” I have no idea why. In my second year at KRLD we went digital and had to learn together how to transition from cassette tapes and carts to computer editing. The name brand for our digital editing system was Burli and that word soon became a verb for us in the sports department. I can still hear Roger saying, “I’m going to Valley Ranch for Campo’s press conference and I’ll Burli it up from there.” We did the TSN Friday Night Football Show together for a couple of years — I knew all the Central Texas schools and coaches from my time in the Hill Country and Roger knew all the rest. When the Astros were in town to play the Rangers or the Rockets or Spurs were in Dallas to play the Mavericks and we needed both locker rooms covered for TSN, Roger always volunteered for the extra duty.

Roger would call me over Christmas break or summer vacation when he was driving back to Dallas from his hometown of New Orleans. It would break up the monotony for him, help keep him awake for those 45-minutes or so. He’d tell me about his family, about all the great food he ate, and he’d describe to me over the phone what he was eating right then as he was driving. He’d hear something on the radio and we’d have to talk about that band for five minutes and where we had seen them in concert and how great they were before we could get back on subject.

We also talked about our faith in Christ. Roger is a Christian. He’s a devout, godly, praying man of faith. And he made no secret about it. When I left the radio biz for congregational ministry in 2005, Roger was one of the few guys — maybe the only guy — in the industry who understood and encouraged me.

Since then, we’ve tried to stay in touch. As I went from seminary to the Legacy Church of Christ in the mid-cities, we’d exchange emails and texts maybe every month or two and a phone call a couple of times a year. When something big happened in Dallas sports, we’d talk. When Roger was named the PA announcer for Dallas Cowboys home games at AT&T Stadium in 2011, I called to congratulate him. When his wife died four years ago I called him and we prayed together over the phone. That same year — three or four years ago — Roger helped me get an internship at KRLD for a college student we’d had in the youth ministry at Legacy. And I think that was the last time I talked to Roger on the phone.

I would text him once or twice during each football season for the past few years. Every now and then I’d catch his booming voice coming through my TV while I was watching a Cowboys game. The crowd would be quiet or the mics would be placed just right or Roger would be extra exuberant and his PA would burst into my living room loud and clear: “First down, Cowboys!” I loved hearing him from AT&T Stadium because I knew how much he loved being there. It was his dream job. I’d text him that night and tell him how thrilled I am to hear his voice and recall our good times together at KRLD. He always responded with a heart-felt thanks, he’d ask about Carrie-Anne and the girls and the church, and then we’d tell each other, “Tighten it up, King!”

I was shocked and saddened to learn yesterday that Roger died Saturday after a series of heart attacks last week. He was 62. His son, Ted, a sportscaster for the Westwood One and ESPN Radio Networks, made the announcement yesterday.

Roger struggled with his health when we were together at KRLD. He ate too much, he weighed too much, he had diabetes, he had issues with his feet, and his whole body was under a lot of stress. But over the past few years, he had gotten all of that under control. He had dropped a ton of weight, he was eating right, and, the last time we talked, he was feeling really good. I had no idea he was in any kind of trouble at all. I didn’t know he had had a heart attack last week.

When he and I called those triple-header “Zero Week” high school football games in the Alamodome for TSN, the kickoff classic for Texas high school football, he brought his son, Ted (he was Teddy back then), along to be our spotter and statistician. Roger did play-by-play for the first and third games while I did color, and we switched roles for the middle game. And I remember how perfectly awesome Ted was. He’s a 16-17 year old high school kid, but his knack for knowing where the ball was going, who was going to be where, and what stat we would need in our ears at exactly the right moment was uncanny. He was the most wonderful spotter I ever had for any game I ever did. I also remember how close Roger and Ted were. It was obvious on those trips. In the press box, on the field, at the restaurant — that father and son duo was tight. God bless Ted and his family.

Roger Emrich was inducted into the Texas Radio Hall of Fame in 2015. His voice, known and loved throughout all of Texas for more than thirty years, ranks right up there in the same class as that of Brad Sham and Craig Way. I’m proud I know the Raj Mahal. I’m honored to be among those who worked with The Human Palace of Sports Exuberance. His absence leaves a massive void in Dallas. His friendship holds a permanent spot among the many joys and blessings of my life for which I am eternally grateful to God.