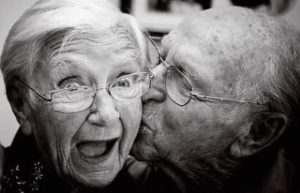 “Do you not know that he who unites himself with a prostitute is one with her in body? For it is said, ‘The two will become one flesh.’… Flee from sexual immorality. All other sins a man commits are outside his body, but he who sins sexually sins against his own body. Do you not know that your body is a temple of the Holy Spirit, who is in you, whom you have received from God? You are not your own; you were bought at a price. Therefore, honor God with your body.” ~1 Corinthians 6:16-20

The apostle Paul forbids Christians from having sex with a prostitute. But the reason he gives is fascinating.

The “one flesh” in Genesis 2 that Paul uses here and in Ephesians 5 means more to him than just the physical union. If he were just talking about body parts, he’d be saying, “He who unites himself with a prostitute unites himself with a prostitute.” Duh! No, he says don’t unite yourself with a prostitute because remember, “The two will become one flesh.” One person. The man and woman who have sex are united at all levels of their lives. Don’t unite with someone physically unless you’re willing to unite with that person emotionally, personally, socially, economically, and legally. Paul is crying out about the abomination of physical oneness without all the other kinds of oneness that God designed to go with it.

Tim Keller says you could paraphrase Paul’s statement like this: “Don’t you know that the purpose of sex is always one flesh — to become united to another person in every area of life? Is that what you’re seeking with the prostitute? Of course not! So don’t have sex with her!”

Now, our culture says just the opposite of what Scripture says and what God’s Church has always taught and practiced. Our world finds the idea of abstinence from sex until marriage as ludicrous. Our culture can’t even comprehend the idea. Yet this is the unquestioned and uniform teaching of all the Christian churches for all time — Orthodox, Protestant, and Catholic. Right down the line. Forever. Not because the Bible has a low view of sex, but because it has such a lofty one. Sex has a divine purpose inside marriage. But when sex is separated from marriage, it can be devastatingly dangerous.

Sex makes you feel deeply connected to the other person even if you use it wrongly. That’s the way God designed it. And it works. Even if you experience it outside marriage. Sex makes you feel deeply and inseparably connected to that other person, even if you don’t want to be. As you’re physically joined, you find yourself feeling marriage-like connections even if you’re not married. You feel like the other person is obligated to you, even though that person doesn’t have the obligation to even call you the next day. So it’s messed up. And it leads to jealousy and hurt feelings and obsessiveness if two people are having sex and they’re not married. Sex makes it really hard to break up with somebody even when you and all your friends and family know you should break up. You feel so deeply connected. You feel a “forever” because that’s how it’s designed. If it’s separated from marriage, though, sex can trap you in a horrible relationship.

If you’re not married, the instruction from Scripture and the expectation of your church — and this won’t surprise anybody — is that you adopt the Christian ethic and practice chastity: No sex if it’s separated from marriage. Now, that will be very difficult, especially in a culture that will give you no support for your conviction. So, you’ll need the Christian community. You’ll need your church to act as a people and a place of open and supportive and loving family. You’ll also need the love and grace of Christ and the boldness and power of the Holy Spirit. And you should be able to find that in your church family, too.