Sex Is From God 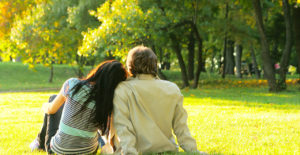 “A man will leave his father and mother and be united to his wife and they will become one flesh.” ~Genesis 2:24

The first explicit mention of sex in the Scriptures is in the second chapter of Genesis. This is the same line Paul quotes in Ephesians 5 and 1 Corinthians 6 when he’s talking about marriage. Man and woman, husband and wife, are to be united to become one flesh.

You know, when we read this, it looks like it’s only talking about a physical, sexual union between two bodies. But it actually means a whole lot more. When Genesis 6:12 says all flesh had corrupted their ways, it doesn’t just mean bodies. It means all people. When Joel 2:28 says God will pour out his Spirit on all flesh, it means people, not just bodies. It’s like if I said I was going to “count noses” in the worship center on Sunday or do a “head count.” I’d say, “I’ve got 985!” (preacher count) and you would know I’m not talking 985 noses or 985 heads; I’m telling you how many people are in the room (more like 700). It’s very common to use a part of a thing to represent the whole thing.

So marriage is leaving your father and mother and uniting with another so profoundly that the man and woman actually become one new single person. We’ve talked about the word “united,” or “cleave” in the older translations. It means to make a covenant or a binding contract. Every aspect of the two lives are sworn together. The man and woman merge into a single, legal, social, economic, emotional, physical, spiritual unit. They give up a lot of their rights and their independence. They give themselves completely to one another.

To call the marriage “one flesh” means that sex is a sign of that personal and legal union and the means to accomplish it. It’s the God-created way to help you give your entire self to your spouse. Sex is God’s ordained way for two people to say to each other, “I belong completely and permanently and exclusively to you.”

Now, we’re not done with this. Today’s post just really sets us up for tomorrow and Thursday.