Halfway through September and the Cowboys are in last place and the Rangers are in first place. The Cowboys score a total of seven points against the Redskins and the Rangers use pitching and “small ball” to complete a sweep of the New York Yankees. There’s something very biblical, very gospel, about all this: the lowly will be exalted, the mighty will be brought down, the humble will be lifted up, the last shall be first, the strong will be made weak. Two quick observations on last night’s game follow some thoughts provoked by Stream.

Stream DFW, this past weekend at the South Mac Church in Irving, was, as always, amazing. Absolutely inspiring. Ken Young and the Hallal singers took us straight to the throne of God. And we dwelt there. We lingered. We soaked up the goodness of our Father’s love. We trembled in the recognition of our own sin in his mighty presence. And we basked in the warmth of God’s mercies. We wept as we sang together at the cross, marveling at those two wonders: “the wonders of his glorious love, and my own worthlessness.”

Terry Rush, the great encourager, spent two-and-a-half days calling us back to the cross of Christ.  We lived in Romans 4 for most of the three different two-and-a-half hour sessions. We talked and sang and prayed and meditated and listened as we considered together our God who gives life to the dead and calls things that are not as though they were.

Things don’t always seem really great. Things don’t always go the way you thought they might. In fact, sometimes, things are really  rotten. Things at home. Things at church. People in your family. Situations. Issues. Sometimes it can seem hopeless. Sometimes it can be overwhelming. You don’t see any light at the end of the tunnel. You can’t believe it’s possible for this or that to work out for good. There’s no way.

Well, have you looked at the cross lately?

You know, we live by faith, not by sight. We live by the Spirit, not by the flesh. We serve a Lord who has already defeated

every single thing that would ever attempt to come between us and our God-ordained potential and purpose as his children living in his eternal Kingdom. Our God looks at his Son dying — deader than dead — on that cruel tree and sees hope. He sees possibility. God looks into the darkness of the tomb and sees eternal life. He looks at Sarah’s barren womb and the 100 candles on Abraham’s birthday cake and sees an entire nation of millions of his people. And our God looks at your life, he looks at your church, he looks at the mess that is you and/or the people around you, and he sees great hope. He sees things we don’t see.

The things happening to you or around you, whatever they are, are not a joke. It’s nothing to be taken lightly. I’m sure it’s all quite serious.

But the cross of Christ and that empty tomb reminds us that it’s also nothing to worry about. It’s nothing to lose sleep over. It’s nothing to sweat. The power of the cross and the resurrection of Jesus takes away all doubt and fear and replaces it with holy power and confidence.

God’s power is made perfect in weakness. And you are weak. You are so pitiful. So am I. We are, together, some of the weakest, most pitiful people around.

And that, my brothers and sisters, gives me great courage.

Two dramatic, game-defining and possibly course-setting plays have been analyzed and re-analyzed to pieces. Here’s the angle from the micro-fiber couch: 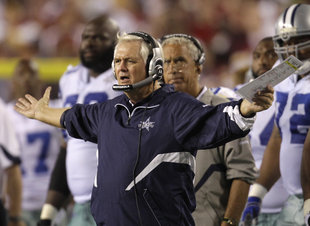 First, every single commentator I’ve heard and read since the minute the game ended to this very moment, those in the local and national media and those in the hallways here at Legacy,  are saying that Jason Garrett and the Cowboys should have taken a knee on that last play before the half. They’re demanding that heads roll in the coach’s offices for attempting a pass in those final seconds.

Of course you pass the ball there. Throw it deep. Hurl it as far as you can. Anything can happen. Dez Bryant can make a career-launching grab. Pass interference gives you a first down and an untimed field goal attempt. Take a stab at it. Throw the ball. You’re going to take a knee and give away an offensive play?

That fumble and Redskins return is not on Wade Phillips or Garrett. It’s on Romo. If you can’t throw it deep, throw it out of bounds. Get rid of it. It does you no good to throw it in the flats to a triple-covered running back who’s one yard beyond the line of scrimmage. Only bad things can happen there. Romo’s been around enough to know. Sail that ball into the stands! And it’s also on Tashard Choice. Why is he fighting for an extra two yards after the gun has sounded? What difference does it make if you get to the forty? Only bad things. Go down!

The argument is that by taking a knee, you eliminate the chance for your players to really mess something up.  You take it out of their hands so they can’t do something foolish. I guess if you’ve got foolish players, that’s the right call.

Wade has already said today that he will never allow for an offensive play to be run in that situation ever again. He’s taking the blame. And he’s listening to the media and the critics. That play at the end of half is on Romo and Choice, not Garrett or Wade.

As for Alex Barron’s third holding call of the night that negated what would have been the game-winning touchdown, there’s nobody to blame but the over-matched right tackle.  I’ve listened all day to people criticizing Garrett and Wade for not giving Barron some backfield help.

No, this is on Barron. He was the most penalized player in the NFL last year. He’s the most flagged player in football — period — over the past five seasons. He’s like what would happen if Flozell Adams and Phil Pozderac had a baby.  It’s awful. Even with all that, what happened on the last play of the game was inexcusable. I promise you could line up every single holding penalty in Barron’s career — and that would be a bunch — and 90% of them would not have been called on that play. It’s the last play of the game! No referee wants to throw a flag that ends the game. No official wants the outcome to be determined by his whistle. But this hold last night was unbelievable! It was a combination clothes-line tackle. From the first step. Less than fifteen yards away from two refs. How could they not call it? That’s on Barron. Totally.

Now, what happens with Barron from here on out is on Wade and Jerry.

Jimmy Johnson would have canned Barron right there in the FedEx Field locker room after the game. He would have given him a train ticket and collected his playbook right there on the spot. Same thing, by the way, with David Buehler. The Cowboys kicker missed a 34-yarder. Jimmy would have had him on the asthma field today. He would bring in former Carroll Dragon Kris Brown immediately to handle field goals this week. (I’m sure there are a couple of extra rent houses in Southlake; for football players only.) Jimmy would have sent the message to everyone else on the team that these kinds of mental and physical errors are not going to be tolerated. Especially on a squad that thinks it might be good enough to win a Super Bowl.

This is an uncapped year. The money doesn’t matter. Get rid of these guys and show the team that this is for real.

Instead, Wade says today that they’re going to concentrate on Barron’s technique. Wade says Alex Barron is the kind of guy who’s going to work hard to correct his mistakes and get better.

And, so, we’re off and running. The Cowboys open the season with a divisional road loss. Coaches are being roasted. Players are being questioned. The end is near.