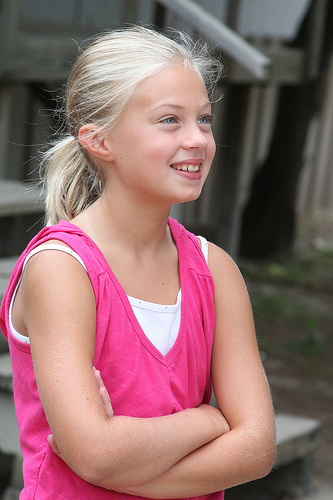 She’s assertive. She’s loud. She’s determined. She’s single-minded in what she wants and what she believes. She lets everybody know what she’s thinking all the time. And she’s fiercely independent.

She never asks us to do anything for her. She always wants to do it — whatever it is — all by herself. She does major school projects on her own, without even telling us she has a major school project, and gets an “A.” She cooks her own meals if we’re taking too long. She’s always picked out her own clothes (which has developed into her distinct Bear-style: cut-off shorts, T-shirts, and Chuck Taylor high-tops). And she doesn’t want anybody telling her what to do.

She has perfect eyebrows. It seems like she loses a tooth every eighth meal. She’d rather sit alone in her room and read a book than do just about anything else. Except maybe Dodgeball. She loves Dodgeball. She thinks she’s stronger than me.

She jumps and slaps the attic access cord every single time she passes through the hall. She plays hard and she’s got the bruised up knees and scratched up elbows to prove it. She appreciates good jokes. She claims she never cries. She wants a gerbil. Bad. She thinks she’s a ninja. She rocks out to Van Halen and Aerosmith and rolls her eyes at the Jonas Brothers and Taylor Swift and all that junk Valerie listens to. She loves horses and dogs and, right now, for some reason, wolves. Her ears are a little tiny bit crooked. Everytime the phone rings, it’s for her. She’s too big for birthday spankings, but she gets upset if I don’t sing School Bells on the first day of school or we don’t watch It’s a Wonderful Life on Christmas Eve. She still thinks boys are gross. She still thinks it’s cool when I eat lunch with her in the school cafeteria.

Carley brings me so much joy. I love just talking to her. She asks really, really good questions. About the world. About literature. About people. She likes to antique shop and look at old pictures and talk about things that happened before she was born. She’s really talented. She’s super smart. She sings like an angel. All the other kids like her. And she likes all the other kids. I’m continually amazed that when I pick her up from school, she seems to at the very center of the biggest crowd. Every day.

God has blessed me so much with this wonderful third daughter. She’s in her last year of elementary school now and growing up so stinkin’ fast. Too fast. And I really do believe she is very special. God has given her lots and lots of unique talents and gifts and abilities. I believe that God is going to use her in huge ways for his Kingdom on this earth. By his power and grace, Carley’s going to do something really big for our Lord. I don’t know what yet. She might wind up writing tons of inspirational books to encourage God’s people to love each other. She might teach or headline spiritual seminars and lead thousands of disciples of Christ to a better life in him. Although we’ve told her repeatedly she can’t ever date anybody who’s not from Texas and she can never, ever live outside the Lone Star State, Carley might very well travel to the other side of the globe and dedicate her life and all those God-given talents to the Lord who saves her. I don’t know exactly what she’s going to do for God and his Kingdom. But it’s going to be something big.