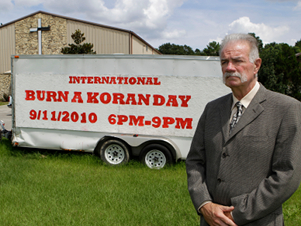 “Love your enemies and pray for those who persecute you.” ~Jesus

Terry Jones is planning to burn 200 copies of the Qur’an on the lawn of his church in Gainesville, Florida this Saturday. He says Islam is of the devil. He claims that Muslims are our enemies and that Christians need to take a stand. His idea of taking a stand is to lash out in a violent show of force and desecrate what is sacred to millions of people who do not yet know our Lord.

“In everything, do to others what you would have them do to you” ~Jesus

Terry Jones says he doesn’t like the Qur’an because it teaches that Jesus is not the Christ. He doesn’t like Muslims because they are killing American Christians in the name of God. So his response is to categorically condemn these people and burn their books.

“Do not be overcome by evil, but overcome evil with good.” ~Paul

Terry Jones says he’s going to show the Muslims that we have freedom and rights. We have the right to free speech. We have the freedom of religion. And we’re going to show all the Muslims around the world that we intend to exercise those rights and freedoms in any way we choose. That may be so. More power to him. But don’t you dare attach the name of Jesus or God’s Church to your crusade. Do not endorse your violent exercise of freedom by invoking the name of the One who voluntarily gave up all of his freedoms to save the world from sin. Do not justify your angry and vengeful actions by claiming their motivated by the One who gave up all his rights, who allowed himself to be mocked and ridiculed and abused and killed in order to save me when I was an enemy of God himself.

“If someone strikes you on the right cheek, turn to him the other also.” ~Jesus

The national media love to find Christians who don’t act like Christ. And they find them all over the place. They’re everywhere. It’s no wonder a lot of people hate us. It’s no wonder.

Terry Jones is not acting like a Christian. To act like a Christian is to love your enemy. To follow Christ is to treat your enemy with compassion and grace and mercy. To be Christ-like is to treat every single person exactly like the child of God, the man or woman of God, the person God sacrificed his very life for in the body of his beloved Son that he or she most certainly is. God loves these people. All of them. They’re all made in his holy image. And he cares deeply for them. Christ died for them. All of them.

Terry Jones does not represent Christ in his words or his deeds.

And Terry Jones does not represent us. This is not who we are. It’s not.

“All men will know that you are my disciples, if you love.” ~Jesus

Father, forgive Terry Jones; he knows not what he is doing.

If you’re still undecided on whether or not you’re going to attend Stream DFW this weekend at the South MacArthur Church of Christ in Irving (Ken Young and the Hallal Singers, Terry Rush), please click here and watch these video highlights from last year’s Stream. And then click here to register. See you there!