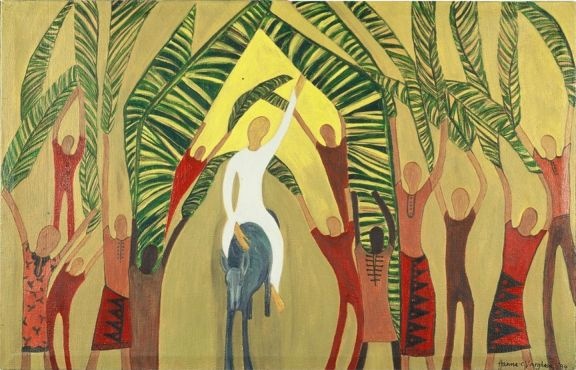 In some ways, and maybe in ways we don’t fully understand, we act like Jesus is going to serve our national or political or economic hopes and dreams. We wave our palm branches and behave like Jesus has come to establish a really great worldly kingdom that reflects all my beliefs and convictions.

Several years ago a gay lobbyist in the Presbyterian church  was fighting for the ordination of gay priests. And this was his main argument: Jesus loved everyone and today he would stand with the gay community, affirming its rights in society and the church; anyone who does not stand with us stands against Jesus.

My blood boils when I hear stuff like that: the use of a political movement or a political agenda to judge another’s discipleship to Jesus. Now, it’s really easy to use that illustration and condemn it as a sinful misuse of the name of our Lord and the Kingdom of God. But can we consider for just a minute how we might do the same things?

If we’re going to think and talk like this, we may as well pull the palm branches out and start waving them. This kind of thinking and acting and talking forces God’s people to choose between the lesser of two worldly evils. Jesus did not come so we could create a better version of the kingdom of the world, he came so we could be part of an entirely new and eternal Kingdom of God. Jesus is not a way for us to get our way nationally or politically or socially or economically. He won’t be used that way.

The Holy One who comes to Jerusalem comes as the King of the entire world and he suffers and dies for all people. His people are not tied to any one nation. His love and salvation reaches beyond all borders of nation and language, culture and race.

Jesus is not going to be President of the USA. One, he’s not running. Two, you wouldn’t vote for him if he did.

Think about Jesus’ platform. Sell all that you have and give to the poor. Love your enemies. If Jesus had bumper stickers on the back of his donkey, they would say, “Be Last!” “Vote for Me and Die!”

Jesus doesn’t come with T-shirts and stickers and buttons and a hundred million dollar campaign. He doesn’t save the world with armies and markets and policies. He saves the world through sacrificial love and suffering and service and grace.

He rules with a towel, not a sword.

And when we finally decide to follow him, we find ourselves descending to greatness. It’s a Kingdom of downward mobility, where those who give up their lives find them. Where the last are first. Where those who die, live forever.