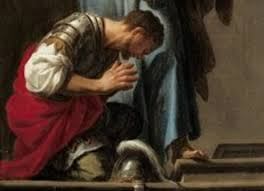 A Roman centurion approaches Jesus in Matthew 8 and asks him to heal his servant back home. “Lord, I do not deserve to have you come under my roof,” he says to Jesus, “but just say the word, and my servant will be healed.” Jesus observed that this soldier had great faith.

This Roman officer recognizes the power of Jesus. He calls Jesus “Lord” twice. This commander of men addresses Jesus as Lord when he was sworn to reserve that title for Caesar. You can’t serve two masters; there can only be one Lord. And this military officer says it’s Jesus. He recognizes Jesus as the superior and sovereign King, the true One, the only One, who can heal his servant. He recognizes Jesus’ power over nature and the elements, his power over demons and sickness and death. He knows Jesus’ power: Just say the word.

Here’s a commander of a hundred men in the Roman army. He’s stationed at a garrison just east of Capernaum. This officer has total control over the men in his company. He tells them when to come and when to go. They don’t use the restroom without his permission. Not only that, he controls all the Jews in this land they’re governing. With just a word, this centurion can order any Tom, Dick, or Larry on the street to march a mile or dig a ditch or carry a cross for a condemned criminal. This guy understands power. And he says to Jesus, “Just say the word.”

“Lord, just as easily as I tell Private Ted to clean his shield or mop the floor or drop and give me twenty, that easy, just say the word and my servant will be healed. I know that whatever you say happens. You just say the word and the forces that have paralyzed my servant will let him go. I have the authority to issue commands. My authority to make things happen comes from a higher power, from a general, from Caesar himself. But you, Jesus, you receive your power and authority from Almighty God in heaven!”

This army officer has picked up on the fact that Jesus is God’s Word, sent by God to heal.

Jesus tells this commander, “Go! It will be done just as you believed it would.” And the Gospel says his servant was healed at that very hour.

This is the beautiful reality in Jesus as the Son of God. The reality is he is almighty, he is all powerful, and he alone has the authority and power to heal and forgive and provide and protect. That’s the reality. And he willingly went to the cross to make that reality ultimately true for anything and everything that’s going on in your life today. 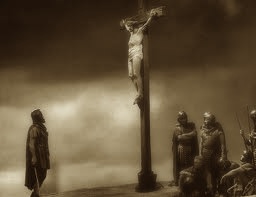 And he said it on the cross. “Father, into your hands I commit my spirit.” Jesus would rather die for you than live without you. And he trusted himself to God, he put his own great faith in God, so the doors to the Kingdom of Heaven can be opened for you and for all who believe.