God is The Creator

And then there was one. For the first time in thirteen years, when we took first day of school pictures this morning, there was only one child standing in the frame holding her school supplies. Carley starts her sophomore year today at Canyon High School. Val began classes today at WT and Whitney is at United. So, yeah, this is different. Carley lamented last night that when I sing our traditional first-day-of-school song (that all the girls publicly protest, but secretly admire) she’ll be the only one I’m singing to. That’s right. Of course, I sang it loud enough so that maybe Valerie could have heard it. But how would I know: she’s not returning phone calls or texts.

Carrie-Anne is beginning her third year as the Culinary Arts Director at Canyon High. We had to stick C-A in one of the photos because Carley was feeling lonely. 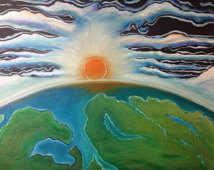 “In the beginning, God created the heavens and the earth.” ~Genesis 1:1

You can theorize about a big bang and discuss primordial matter all afternoon. But what we clearly have in Act One, Scene One is God speaking into nothing and creating everything. In the beginning, there is an explosion of life and God is the sole initiator. This story counters all the other stories that were out there at the time: that creation was a mistake, that it was the result of strife between rival gods, that human beings were an accident. All the creation stories before the one in Genesis were about conflict and hate and violence and war and mistakes. Our story says creation is the intentional action of a loving God.

“The Lord is the true God;
he is the living God, the eternal King.
These gods who did make the heavens and the earth will perish from the earth and from under the heavens.
God made the earth by his power;
he founded the world by his wisdom
and stretched out the heavens by his understanding.” ~Jeremiah 10:10-12

Sometimes we shake our fists at God. When he’s not doing what he think is loving or just or wise, we yell at God. “Why are you doing that? Why are you not doing this?” The reason we believe he is all responsible is because we believe there is no other God.

In Acts 4, the early church is praying for God to do something great. The Christians are being persecuted and arrested and thrown in prison. And the church prays. “God start healing people. God start doing miracles. God handle the problem of the government. God perform some mighty wonders.” They’re expecting great things. Why?

“Sovereign Lord, you made the heaven and the earth and the sea, and everything in them.” ~Acts 4:24

God is the The Creator. It’s basic. It’s foundational. It’s so important. All of salvation is predicated on Creation. Once we get a handle on it, the whole rest of the Story of God makes perfect sense. The ugliness of sin, the redemption and New Creation of all bodies — it truly adds up when Creation is the first Act.