All of Creation is Good 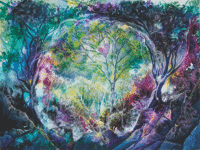 We look around today and a lot of us say, “The world now is worse than it’s ever been.” And I want to say, “What’s your frame of reference? What’s your standard? Ever heard of the Middle Ages? Today is not that bad.”

It is true that we rebel against our Creator and we misuse God’s Creation and we make ourselves and others around us miserable because of our rebellion. But there is nothing in the Story and nothing in our theology that says God’s Creation has become a bad Creation. The evil that invades God’s Creation is not stronger than the Creator. It can never change the essential goodness of what God created. Despite everything that spoils and corrupts it, we live in a very good world and it is very good to be alive today in it.

We affirm the goodness of the world, not because we’re optimistic about people or because we’re ignoring all the injustice and suffering. We are well aware that because of human wisdom we endure wave after wave of hopelessness and despair. What humans consider progress has resulted in the brutality of modern wars, the suffering and oppression of minorities, the ever-widening gap between the few rich and comfortable and the many poor and helpless. But we don’t give up on it. We don’t withdraw from it. We’re not trying to leave it. We affirm the world because God created it and he says “Yes” to it.

The Creation belongs to God. It’s his. He made it and he owns it. All of it. It’s his property. That’s why when evil comes in and seems to take over, God doesn’t abandon the world and turn away from it. He comes here in flesh and blood to suffer with it and for it. It’s good, it’s all good; and he’s committed to it. In the death and resurrection of Jesus, God reclaims what’s always belonged to him and asserts forever his powerful and loving lordship over the world, for the sake of the world.

To try to escape this world or our worldly responsibilities would be to try to escape from God. Focusing on some kind of future in the sky and not paying attention to our present and future world is not living in step with the Story. God promises not only a new heaven, but a new earth.

All of Creation is good. Right now. Today and forever.

We look around and say, “I don’t know…” and we wring our hands. God looks around and says, “I do know!” And we align our minds and our wills to his.