It’s just a Church of Christ thing, right? The “Plan of Salvation,” also called the “Five Steps of Salvation,” is unique to us, I think. And those of us who were raised in and by the Churches of Christ know them well: Hear, Believe, Repent, Confess, Baptism. In that order. As a kid in the ’70s, this was drilled into me by my Sunday school teachers in Bible class, by the preachers from the pulpits, by the youth ministers at the devotionals and rallies, and by the Open Bible Study my dad walked me through when I reached the “age of accountability.” The five steps were plastered on bulletin boards in the church hallways, illustrated by charts and diagrams on mimeographed handouts, and splashed across banners promoting the next Gospel meeting. These were the five steps, always accompanied by supporting verses of Scripture, that necessarily had to be followed — again, in order! — for one to be saved.

You ever wonder how that started? You ever question the validity of such a list? If you or your church were to make a list of supposed steps to salvation, what would you include? What parts of our CofC list would you leave out?

Historians point back to our movement’s focus on rational thought and enlightenment thinking that characterized the mainstream culture of America at the turn of the 19th century when Stone and Campbell and others were attempting to “restore” God’s Church. It was all about scientific reasoning and empirical evidence and deductive problem-solving. Society at this time was convinced that there were undeniable patterns, unalterable designs in nature and in the world that, if learned and applied, held the keys to everlasting peace and joy.

Alexander Campbell searched the Scriptures in this way and came up with what he called “the ancient gospel,” a pattern he believed was the divinely-ordained natural way to heaven. According to Campbell, it all boiled down to, in this order: gospel facts (death, burial, resurrection, and ascension of Christ), faith, repentance, reformation (of life), baptism, remission of sins, reception of the Holy Spirit, sanctification, resurrection of the saints, and eternal life. In that order. Campbell claimed that all Christian denominations believed in all these steps, but put them in different orders according to their own interpretations or theories of conversion.

At about the same time, Walter Scott came up with a biblical pattern and called it “the gospel restored.” He had six points originally. The first three were what humans had to do to be saved: believe, repent, and be baptized. The last three were what God promises to people who do the first three: forgiveness of sins, the gift of the Holy Spirit, and eternal life. Not too much later, Scott shortened his list to five points — one for each finger on a person’s hand, for easy remembering: faith, repentance, baptism, forgiveness of sin, and the gift of the Holy Spirit. 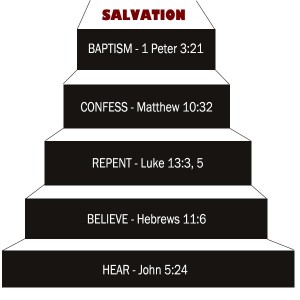 This method proved to be very successful on the early American frontier where most everybody had been trained in Calvinism which claimed that men and women were saved only by God’s predestination, that one couldn’t do anything to save himself, it was all up to God’s pre-ordained choosing. By telling these fiercely independent early frontier people that there really was something they could do to be saved, the Stone and Campbell churches fueled a massive rush to repentance and baptism.

As with most good things, we swung the pendulum a bit too far. Pretty soon, we were taking God’s initiative and the Holy Spirit’s active participation clear out of the conversion process. Preaching became all about proving “facts” with arguments and evidence. The Holy Spirit’s work in the past had been entered into the Biblical record and was there to be studied in a rational manner, but it wasn’t necessary for a person’s salvation. The emphasis was on logical fact-finding and step-following and persuading people to “obey the gospel.” The “gospel,” of course, being the steps. 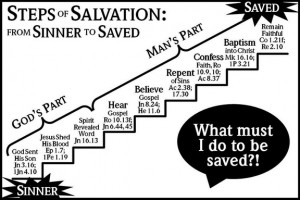 So, at some point in the middle of the 1800s, it gets boiled down to what we have today in the five steps of salvation or the plan of salvation: hear, believe, repent, confess, be baptized. Notice how God’s divine activity is completely absent from any of the steps. Notice how this chart here to the right — all of these charts were downloaded from Church of Christ websites this morning — actually gives much more responsibility or credit to man than to God for salvation. Where is God in our “plan of salvation?”

Why is baptism the last step? Who took out “sanctification,” the guiding of the Holy Spirit, and the grace of God to continually wash our sins?

It is God who works to will and to act according to his good purpose. It is God who initiates salvation, who begins the good work and sees it through to completion. Belief and repentance and confession are salvation steps to be taken every day, not once on a ladder list of human accomplishments. Baptism is never the end of what the apostle Paul calls “being saved,” it’s the beginning. Our five steps minimize our God. Our five steps neglect a lifetime of day-by-day, hour-by-hour difficult discipleship to Jesus. And they ignore the unmerited and continuous grace of our merciful Father.

OK, maybe that’s a little harsh. Too judgmental, probably, Yes, we come by the “five-steps” thing naturally. It’s been handed down to us by faithful men and women who were doing their very best with what they had to work with during the times they lived. And I’m grateful for it. Seriously. But I’m also so glad that we’ve recognized the many shortcomings in this kind of incomplete view of salvation. I’m so glad that we’re acknowledging together the active role of God’s Spirit in the calling and saving and sanctifying of the saints. And I’m glad we can change. I’m so glad, by God’s grace, we’re allowed and even compelled to change.