Whoever had the idea of hosting the annual DFW area fundraiser at the Ballpark in Arlington deserves a raise. Unless it’s Kelley.

What a magnificent time we had Friday night at the Rangers Hall of Fame with Jim Sundberg and about 600 of our good friends, eating delicious barbecue and raising a lot of money for Great Cities Missions. For Carrie-Anne and the girls and me, we experienced several worlds colliding as we ran into a bunch of great friends from Legacy, Central, Dallas Christian, and Oklahoma Christian. Yu Darvish struck out ten and the Rangers bats finally woke up in an enjoyable rout of the Mariners. And I ate for the cycle: barbecue, nachos, cotton candy, and ice-cream. 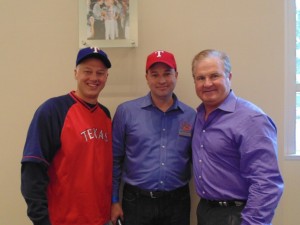 Yes, I admit it, I was gushing a bit when I introduced Jim Sundberg to the crowd and engaged in some Q&A with the Rangers’ legend. Darryn Pope accused me of almost kissing Sunny and Craig Gladman said the whole thing was a disgusting spectacle. But we all learned about Matt Harrison’s back injury, we heard what it was like trying to catch Charlie Hough, and we auctioned off nearly $3,000 worth of autographed baseballs. All told, Great Cities Missions raised right at $73,000 Friday night for the support of missionaries and the planting of churches in Latin America.

The following morning, Saturday, I was blessed to join the GCM board of directors for their meeting. I was honored to be invited to deliver the devotional at the beginning of their meeting and intended to use my time to praise and encourage this impressive group of faithful men and women who work so tirelessly in the Kingdom of God. But, in the end, I was the one who came away the most encouraged and inspired. Man, there’s a bunch of really great people at Great Cities Missions. What they are doing is God’s work. They see people the way God sees people and they turn their lives upside down for the Gospel.

Everyone Jesus met, he saw them as beautiful. Beautiful because of what they were meant to be. Beautiful because of what they were created to be. Beautiful because he saw in them what they were actually going to be. And the folks at Great Cities Missions embrace that kind of thinking and doing every day with everything they’ve got. They partner with and train and support the men and women who are giving their very lives to the great cause of Christ. They organize and raise money and pray and travel and sacrifice and serve for the ultimate promises of God in Christ. They don’t just believe in the mission; they are grabbing it! They’re investing in relationships, they’re making themselves vulnerable, they’re taking the risks, they’re holding nothing back.

At one point in the meeting, while listening to another trainer and church planter tell another powerful story about a missionary family working in a foreign field, I leaned over to John Todd and said, “Man, the people in this room, they’re all in, huh?” He said, “Oh, yeah. Every one of them.”

The God who began a great work with Great Cities Missions is faithful to continue that work and, on that great final day of eternal glory, bring it to completion.