If Stone and Campbell Could Do It… 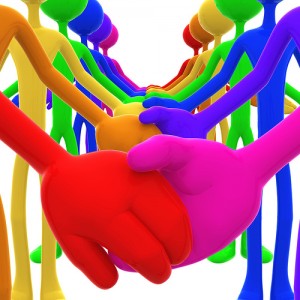 In an effort to raise our “spiritual historical consciousness,” we’re studying Foster and Holloway’s Renewing God’s People in our Sunday morning Bible classes here at Central. As a church family, we’re acknowledging that Churches of Christ have a particular history, that we’ve been shaped by cultural and historical ideas and events, and that some of the things that have marked us as a faith tradition are really wonderful and some things are a little less than wonderful. My hope is that, through the course of this study, we’ll come to realize that our beliefs and practices are continually informed and molded by the culture. Through that realization, I hope, we’ll better see that some of the things we believe are sacred really aren’t and that some of the successful ways and means of the past aren’t necessarily the way to be church or impact a community in the present. And, I pray, we’ll commit to re-claiming the very best parts of our American Restoration Movement heritage and expressing them again in faithful ways.

The most beautiful thing about the Restoration Movement and Churches of Christ is that we were founded on the Christian principle of unity. The unity of all believers is a key biblical doctrine and it was the driving force behind our movement. So much so that, despite their massive differences of theology and opinion, Barton Stone’s and Alexander Campbell’s churches united on January 1, 1832.

Consider for a moment their immense differences:

While Campbell held to the Trinitarian concept of God as one divine deity living in community as three distinct persons, Stone didn’t see it that way. He believed doctrine of the Trinity couldn’t be found in Scripture, that it belonged to the creeds from which they were trying to distance. Because of that, Stone saw Jesus as the “son” of God, but not truly God himself. Yes, Jesus is our Savior, Stone argued, and he is exalted at the right hand of the Father, but he’s not God himself. Campbell disagreed, holding to the more traditional doctrine that Jesus is God himself in the flesh.

Concerning the Holy Spirit, Stone believed God’s active and continuous work in the world was done through his Spirit. The Spirit is active in the Church, he is active in the hearts and minds of God’s people, he is active and working in all of creation for the sake of the Kingdom. On the other hand, Campbell believed that the Holy Spirit inspired the writing of the Scriptures, and then pretty much ceased operating outside of them. Campbell taught that the Spirit only spoke to man, only worked on man, only compelled and shaped man, through the reading of the Word. Therefore, Campbell believed that the visible signs of the Spirit — speaking in tongues, healings, prophesying, etc., — had ceased, whereas Stone most certainly did not.

As for mankind, Stone leaned a little Calvinistic in his belief that man was unregenerate and stained with sin at birth. Stone taught that the Holy Spirit of God is the one who convicts and converts men and women to Christ. Campbell, of course, preached and wrote that God had given man a brain and good common sense and that, when reading the Bible with an open heart and open mind, one would make the right decisions about salvation through Jesus. Campbell saw humankind in a really optimistic kind of way: with our brains and hard work, people are getting better and better and America is the Promised Land where we’re going to restore the divine ancient order. Stone: not so much. He believed humans were getting worse, not better, and that only God’s Spirit could turn a man to heaven.

Stone saw salvation as the work of God’s Holy Spirit transforming men and women into the image of Jesus. Campbell saw salvation in terms of knowledge and intellectual assent. He stressed the atonement aspects of the cross, more as an economic transaction that paid for our sins. Stone concentrated his doctrines of salvation on the love and grace of a merciful Father. Stone’s churches placed a greater emphasis on an ordained ministry while Campbell maintained that all Christians were ordained ministers of the Church. Campbell wouldn’t allow anyone in his churches who hadn’t been baptized. Stone believed baptism was essential, but he’d allow unbaptized men and women to join his churches, saying that they were all just in different places on the road to understanding. Campbell’s churches celebrated the Lord’s Supper every Sunday, Stone’s much more infrequently. Stone was a pre-millennialist, Campbell a post-millennialist.

That’s a lot of differences.

In the seven classic categories of Christian theology, Stone and Campbell disagreed on all seven. And these are big issues. We’re not talking about order of worship or women’s roles, we’re talking about the very nature of God, the salvation role of Jesus, the importance of baptism and communion, church leadership structures, and the role of the Holy Spirit.

Yet, both of these men and their dozens of churches understood that Christian unity is the holy will of God; that breaking down denominational barriers and coming together in the name of Jesus is a true expression of the Gospel; and that divisions and separations among denominations is an evil distortion of the Gospel, an insult to Christ, and sends the worst kind of message to an unbelieving world.

And they did it.

It was difficult, extremely difficult. There were bumps along the way and hurdles to overcome. But for about 65-70 years, they did it. Together.

They made the decision that what they shared in common in Christ was far more important than anything on which they might differ. They believed it was truly God’s will and best communicated to the world what God was doing in Christ. To borrow from Foster:

“Christian unity may not always mean a physical merger of congregations or movements. But when Christians are convinced of the importance of unity and are willing to put up with each others’ peculiarities in the knowledge that all are committed to knowing and doing God’s will expressed in Scripture, the kind of unity seen in our Stone and Campbell history may be the best and fullest kind there is.”

So, the question today: Is sacrificing and working for visible expressions of the unity of God’s Church as important to us today as it was to Stone and Campbell? How important is it in shaping our congregations more into the image of Christ? How important is it to testifying to the power of Jesus in our city? How far would you or your church be willing to go to make the attempt?

All of Scripture points to God’s people as being one. God’s Church is his one chosen people around his one common table. We know we’re going to be one and eternally united in heaven. What are you and your church doing to lean into that right now so that’s God will is done here just as it is there?