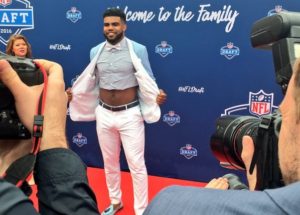 The Cowboys caved this morning and signed their star running back to a six-year contract extension worth $90-million,  with $50-million of it guaranteed. That makes Elliott the highest paid running back in NFL history, both in terms of the guaranteed money and the average annual salary of $15-million-per-year.

This is the offense that ranked 22nd in the NFL last season.

Now, I do have a few  questions about that.

The inaugural season for the Amarillo Sod Poodles extends into the playoffs tonight with game one of the Texas League South Division series against Midland at our downtown ballpark. It’s a best-of-five series with the first two games here in Amarillo and the final three, if needed, in Midland. The winner then plays the North Division winner for the Texas League Championship.

It’s Wednesday, so I’m not able to take in the opener this evening — it’s a work night. But I’ll be there in Dale Cooper’s awesome seats for the first pitch tomorrow.

I still can’t believe our AA team is called the Sod Poodles. I refuse to refer to them as the Soddies or to call the stadium by its paid-for name. Principles, man. But I do love going to that beautiful ballpark on a clear dry night in Amarillo, eating nachos and drinking Texas Tea, and watching our team hit homeruns, steal bases, and dive at the sharp liners on their way to a win.

If the baseball game has been the place to be in Amarillo this summer, tonight and tomorrow night are going to be beyond fantastic.