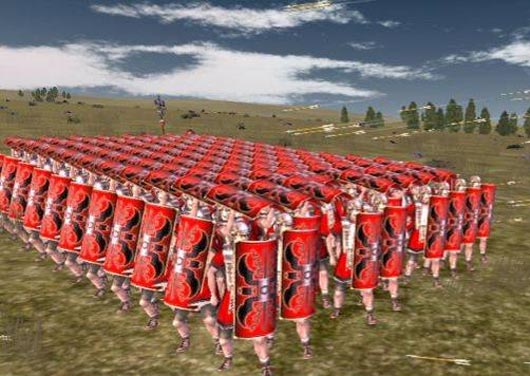 Every person listening to these words of Paul was familiar with the Roman soldier. They knew what he looked like, how he was dressed, and how trained for battle he was. Every one also understood very clearly that Roman soldiers did not exist as individuals. The story of the victory of Rome over the armies of the world is not about a Roman soldier. It’s the story of the Roman legions.

They knew how to march together into victory after victory. Arms locked, shields overlapping, protecting themselves and one another on all sides — they were an unstoppable force. Together. Their power was in their movement together. What made them impenetrable and kept them undefeated was their step by step movements as a single unit. Together.

I imagine that before each battle every soldier would not only put on his own armor, he would also help other soldiers with theirs. He would help another guy strap on his helmet and tighten it up, he would assist a fellow soldier or two in cinching up their belts and sharpening their swords, he would oil his own shield and the shields of others, he would check the breastplates and re-tie the boots of every soldier who marched near him. He wanted the soldiers next to him and all around him to be well dressed and ready for battle. His own life depended on it!

As with us. If your breastplate of righteousness isn’t buckled on straight, I’m going to suffer. If your belt of truth is sagging a bit, I could wind up in trouble. If my feet aren’t laced up with readiness, it could impact you. If just one of us is going into battle with a big chunk missing in their shield of faith or with no helmet of salvation or sword of the Word of God, we’re all going to be in danger.

Most of us are very aware that it’s difficult to practice our Christianity. Some days are harder than others. But following Jesus in this world is certainly not easy. We may not be aware, though, that our individual struggles are all part of a much larger Kingdom battle. Every personal victory of yours is a victory for all of us who call Jesus our Lord. In the same way, every defeat you suffer is a defeat for the Kingdom.

We need to be in the business of checking armor. Yes, check yours first; but don’t ignore the neglected or missing pieces from your buddy’s set. Check each other. Tighten up your walk and that of your Christian brother and sister. When we’re doing discipleship together, my armor helps give you cover and your armor plays a role in protecting me, too.

The devil is scheming. He’s clever. He’s methodical. He uses cunning and strategy. He plots and plans. He knows all our individual and communal weaknesses. And he’s serious about hitting us hard.

So we commit to helping each other get ready. Then we walk into the battle together.