You can have your contrived reality shows with all their re-writes and re-takes; you can have your made-for-TV dramas with their over-the-top plot lines and cheesy puns; you can have your sitcoms with their increasingly crude dialogue and predictably provocative promos; you can have your daytime soaps, court room judges, and talk shows that cater to the lowest of the common denominators; you can have your 24-hour news channels that can honestly qualify as any of the aforementioned television genres in any given hour. For sheer, unfiltered, un-rehearsed, unscripted drama and entertainment, there’s nothing in the world like watching the Dallas Cowboys lose.

Seemingly every single week, this team finds new and exciting ways to snatch defeat from the jaws of victory. Sunday, Monday, Thursday, at home or on the road, it doesn’t matter. The Cowboys uncover brand new ways to experience gut-wrenching, heart-stopping, demoralizing, kick-to-the-gut defeats.

How magically delicious was Sunday in Detroit? Dallas is up ten points with four minutes to play, they’re winning by six points with 62-seconds left, and somehow LOSE! The Lions have the ball at their own 20-yard line, no time-outs, second down, 56-seconds to play… and WIN! As the Cowboys defense is imploding on the field in what was an historic loss by franchise and NFL standards (more on that below), the offense was exploding on the sidelines as Dez Bryant nearly ranted and raved his way to a punch in the mouth. How juicy was that? The injury-depleted, practice-squad-style defense was getting shredded for the game-losing points and the core of the franchise, the highest paid and highest profile players, were screaming and yelling at each other near the benches. 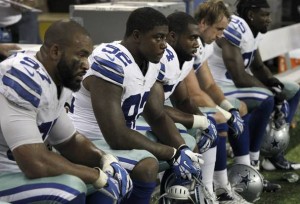 Yes, I know it’s tough when you’re trying to cover Calvin Johnson with Jeff Heath, Jakar Hamilton, and B. W. Webb. I know, you could have brought back Mel Renfro, Charlie Waters, Cliff Harris, and Everson Walls and Johnson would have still racked up those 329 yards of receiving. Injuries have killed this defense. Monte Kiffen was not expecting to play with Kyle Wilbur and George Selvie on his defensive line. But, still… This is ridiculous, right? Oh, yeah. It’s unprecedented.

After giving up those 623 total yards on Sunday, the Dallas Cowboys are now ranked dead last in the NFL in yards allowed. They’ve given up 3,380 yards this season, more than any other team. This is the first time in the history of this once proud franchise, the first time since Tom Landry drew up the Flex on a blackboard at the old practice field on Forest Lane in 1960, the first time ever — EVER! — that the Cowboys have been ranked last in the league in defense. It’s never happened before, not in any week at any point of any season in history. How ’bout these Cowboys? Worst. Defense. Ever.

Yeah, the Cowboys lost Sunday with a plus-four in the turnover department, an impossibly difficult thing to do. But they’ve been doing things like this for years. Just this season alone, in just eight games, Dallas has given up four individual 400+ yards passing, with Drew Brees and Aaron Rodgers still on the schedule. Three of their four losses are by a combined five points. It’s a killer. But it’s nothing new.

Do you realize that there is not one eighteen-year-old on this planet who was alive the last time the Cowboys played in a Super Bowl? There’s not one person 21-years-old or younger who can remember a Cowboys Super Bowl appearance. Jerry Wayne is presiding over the longest Super Bowl drought in the history of this team. The Cowboys have never, ever gone this long without a Super Bowl. The longer it goes —- I don’t see it changing any time soon, do you? — the more likely it is that the Cowboys someday devolve into something like the Lions: a mediocre team with three or four really talented super stars who never make it to the playoffs. Five or six more .500 seasons like this, (overall, since 1996, the Cowboys are one game below .500) and the Cowboys will be relegated to “eh, who cares?” status. They will no longer be the team everybody loves or hates. They’ll be the Lions, the team nobody cares about.