For the past six months, anytime we’ve wanted a blizzard or a polar vortex or an incredible system of thunderstorms and rain to move into the area, we’ve only had to plan an outdoor church event. Now, it seems, planning an outdoor church event results in the hottest most humid day of the season. It was 101-degrees in the shade yesterday. And our Central section at the downtown ballpark was not in the shade! 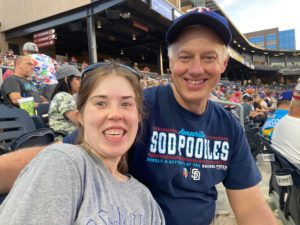 Our annual Central night with the Sod Poodles was a sultry affair, but we had more than 230 of us sweating it out together. As always, the baseball game was merely the backdrop to an evening of hanging out with people we love. The dollar hot dogs and the souvenir cup refills are not what bring Central folks to Hodgetown. It’s the joy of just being together. 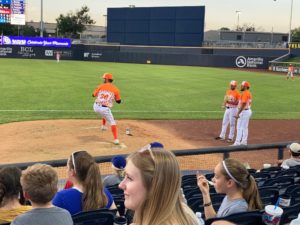 The joke was that it was Allan Stanglin Appreciation Night because the Corpus Christi Hooks were wearing their Wednesday Whataburger uniforms. I’m telling you, it was hard rooting against a team wearing those orange Whataburger stripes and numbers. As the game wore on – it was still the 7th inning at 10:00pm – Ira told those around him he was staying until it was over or until Allan jumped into the dugout and stole a jersey. 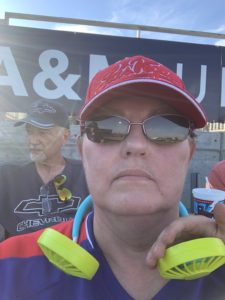 Myrl wins Sticky Buddy of the Year for the fifth straight year after treating the Love clan to the air-conditioned suites above home plate. Greg gets points for cramming two wieners into a single hot dog bun. Twice. Gail’s innovative neck-fans kept her cooler, but not enough to allow her to smile. All the high school students are to be commended for arriving home from the float trip and getting to the ballpark in about an hour. And after watching the Hooks in those sweet unis, I’m feeling an urge to move to Corpus Christi.