When Ho-Hum is OK

If the members of Central Church of Christ find partnering with the downtown Baptist, Presbyterian, and Methodist churches in worship and ministry together mundane or even boring, is that a bad thing? Or is it a really wonderful thing?

Two years ago, our very first official “4 Amarillo” event was a combined school supplies drive. The sorting and packing of those school supplies at Polk Street Methodist that week was a chaotic, joyful, surprise-filled, enthusiastic evening as all four of our churches marveled together and praised God that the denominational walls between our churches were coming down. We all expressed how blessed we felt to be able to participate in something so exciting as breaking down the barriers and coming together as one group of disciples of our Lord Jesus. There was a real sense in the gym that night that God was doing something important with this, that we were participating in something unique. Ground-breaking. Significant.

That is not quite the feeling anymore.

Sure, we had more than plenty of volunteers show up to sort and pack the school supplies last night. Yes, all four of our churches collected more than what we were asking in school supplies for our four downtown area elementary schools. And, of course, there’s nobody who doesn’t think what we’re doing together is significant both here locally and in the larger Kingdom scheme of things.

Maybe that’s to be expected. It seems we’re increasingly in need of new programs and new initiatives. Maintaining old ministries and faithfully working in established areas isn’t nearly as exciting as something new. And something “new” doesn’t last as long as it used to. Yeah, I should have known the novelty would wear off. The excitement would wane. Good grief, it would be unrealistic to expect us to continue with the same level of energy for three years — it was so high! 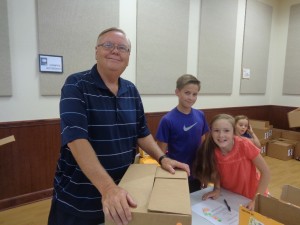 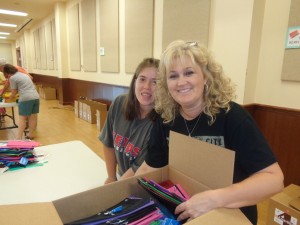 I like to think we’re not growing tired of “4 Amarillo” and what it stands for, it’s just become very “normal” for us. And that’s not a bad thing. That our kids see nothing out of the ordinary about worshiping God with Baptists and Presbyterians is definitely a major step or two toward the Kingdom of God. That our folks view Maundy Thursday at First Pres and Good Friday at Polk Street and Thanksgiving worship services at Central through similar lenses is cause to celebrate. That our city sees “4 Amarillo” now as standard is a tremendous victory and a mighty witness to the power of Christ Jesus who died on the cross to break down the walls so that all his people might be one.

That a Church of Christ is cooperating with anybody on anything used to be big news around here. And it was exciting. Now, it’s ho-hum. And that’s OK.