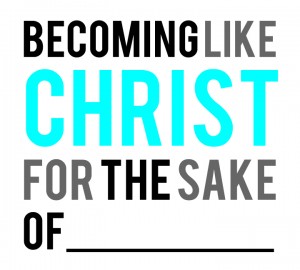 Remember the Russian comedian Yakov Smirnoff? Born and raised in Russia, Smirnoff lives in the U. S. now — Branson, I think. A lot of his comedy was based on comparing life in Russia to life in the United States. One of his funniest bits is about the first time he ever walked into an American grocery store. He says, “I walked in and one of the first things I saw was powdered milk. You just add water and, boom, you’ve got milk! A couple of aisles over I saw cans of powdered orange juice. You just add water and, boom, you’ve got orange juice. Then I saw a whole shelf of baby powder!”

Wouldn’t it be great if we just added water to ourselves and became instantly just like Jesus? What if the waters of baptism didn’t only wash away our sins, fill us with God’s Holy Spirit, and connect us to the body of Christ? What if the moment we came up out of the water we were automatically perfect? We know it doesn’t work that way. Whatever you call it — sanctification, salvation, spiritual formation, transformation — it doesn’t happen overnight.

Becoming like Christ is a gradual thing. It’s a process. Scripture calls it “being saved.” The course of being made perfect, being changed into the image of Jesus is difficult and lengthy. But this is exactly what God is doing with those he’s calling and saving. He is forming us into the image of his Son.

“We all reflect the Lord’s glory and are being transformed into his likeness with ever-increasing glory, which comes from the Lord, who is the Spirit.” ~2 Corinthians 3:18

Being saved means being changed: changed into the image of Jesus, shaped into his character, formed into his nature. It’s conducting ourselves every day in a manner worthy of the life, death, and resurrection of our Lord. Paul tells the Galatians he’s agonizing until Christ is formed in them. He writes in Romans that we’re predestined by God to be conformed to the image of his Son. He writes to the Colossians and says the goal of everything God is doing with Jews and Gentiles alike is “Christ in you, the hope of glory.”

But it’s slow. It takes time.

That’s why the very first word in our vision statement is “Becoming.” We want to constantly remind ourselves and proclaim as loud as we can to anyone who’s listening that nobody at Central Church of Christ has arrived. Nobody here is perfect. Nobody here has it all figured out. We are becoming like Christ. It’s a process. You know, some people won’t give life in Christ a chance because there are so many church people out there who think they’ve got all the answers. We want it to be known up front that we’re still pretty much a mess. Yes, we’re on our way. But nobody’s there yet. It’s a journey of ups and downs, of thrilling victories and devastating setbacks. We still have a lot to learn, we still make terrible mistakes. There’s a place in our church for anybody who has questions or doubts, for anybody who still says or does the wrong thing from time to time, for anybody who doesn’t feel perfect. Because we’re all in that little boat, fighting the storm, straining at the oars. But in the middle of all that, God is making us more like Jesus. It’s slow, but he’s doing it.