The Texas Rangers took over sole possession of first place in the American League West during the first week of the season on April 9. They have held sole possession of first place in the division since that date: 177 days in a row. On June 30 they held a 13-game lead over the Oakland A’s. Last week their lead was four games with only six to play. Today, that lead is gone.

The Rangers have — choked? No, I can’t say choked; I’m not going to say gagged, either; Mary would love it if I admitted my team has choked — collapsed. Today their once insurmountable lead has vanished. 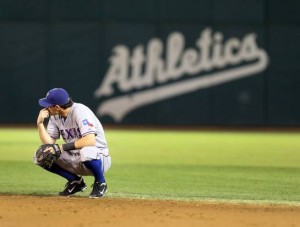 Texas has lost six of its past eight games and now must win today’s season finale in Oakland to avoid a one-game playoff against the Yankees or the O’s just to make it to the ALDS. The timing couldn’t be worse for the Rangers to play their worst 12-game stretch of the season. Over these past dozen outings, Texas is 4-8. During this time, they’ve hit just .248, scored just 3.8 runs per game, and hit .202 with runners in scoring position (18-89). It’s awful.

Should they lose this afternoon — Texas is 2-6 at the Coliseum this year — it will be an historic collapse (I’m NOT saying “choke”). Only four teams in all of Major League Baseball history have ever trailed by 13 games and then come back to win a division title. Oakland is one win away from doing it against the Rangers.

Ron Washington and his players are all saying the right things. Yes, the season long goal of winning the West is still there for the taking this afternoon. Yes, this team is more than capable of going on an offensive tear and piling up huge offensive numbers with clutch hits and winning a bunch of games in a row. Yes, that streak could start today. It could. 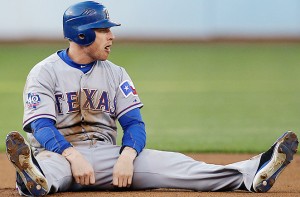 But you’re seeing what I’m seeing, right? The body language tells all. These Rangers appear to be beaten. The hang-dog expressions, the slumping shoulders, the shuffling feet — it says a lot. And the A’s really do have something special going on. While I’d like for somebody to smash that showboating Balfour in the mouth with a line drive back up the box, you have to admire what’s going on with the Swingin’ A’s. They’re incredibly young, really talented, and having a very good time. There’s an energy there. There’s an attitude. It reminds me of the 2010 Rangers which, now, seems like a long, long time ago.

Here’s hoping Ryan Dempster can go a full six or seven innings and only give up a couple of runs. Here’s hoping that if Wash insists on putting Soto behind the plate, the benefit of his working relationship with Dempster will outweigh his failings with the bat. Here’s hoping Kinsler is wide awake on the basepaths and Hamilton is dialed in tight. Here’s hoping Adrian Beltre is starting at third base and Mark Lowe misses the bus to the stadium.

You can text me after 2:30 this afternoon. But don’t call.