(Scroll to the bottom of this post for details on the contest for all the books.) 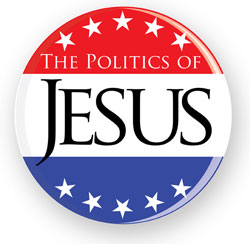 Bryan Roberts has written a blog post that was modified into a recent article for Relevant magazine, a periodical that explores the tricky relationship between Christ and culture. The article is titled “Seven Things Christians Need to Remember About Politics.” I believe in these last few weeks before the U. S. presidential elections, we would greatly benefit from an honest assessment of the tension between being a Christian and being an American; we would mature and grow from an open discussion of the tension between following Jesus and being a United States citizen. Roberts’ article doesn’t go nearly deep enough, it doesn’t fully answer all the questions. But it’s not meant to. It’s intended to make us think better and to foster more meaningful conversation.

I’m not going to spend seven posts on this. But we are going to consider this together for the rest of the week. We’ll break down the seven things starting tomorrow. For today, I just want to share the opening lines of the article to provoke some thought. And some comments.

Political discourse is the Las Vegas of Christianity — the environment in which our sin is excused. Hate is winked at, fear is perpetuated, and strife is applauded. Go wild, Christ-follower. Your words have no consequences here. Jesus doesn’t live in Vegas.

Not only are believers excused for their political indiscretions, they are often cheered for committing them. Slander is explained away as righteous anger; winning arguments are esteemed higher than truthful ones; and those who stir up dissension are given the pulpit. So forgive me if I balk when pastors tell me the church should engage in the political process. Why would we do that? The political process is dirty and broken and far from Jesus. Paranoia and vitriol are hardly attractive accessories for the bride of Christ.

Rather than engage in the political process, Christians have a duty to elevate it. Like any other sin, we are called to stand above the partisan dissension and demonstrate a better way…. It’s time we talk politics in a way that models the teachings of Jesus rather than mocks them.

Roberts hits on two of the bigger questions I’ve got when it comes to Christians and worldly politics. One, why do we think it’s OK to speak and act and think in decidedly un-Christlike ways when we’re speaking against the people of a particular political party or acting in response to a political speech or thinking in terms of political gains and losses? And, two, if earthly politics fosters so much unchecked un-Christlike behavior in our Lord’s followers, why are we always pushing the Church to get involved?

When the Church of Scripture says “Jesus is Lord,” it means “Caeser is not;” when the Church of the Bible says we are citizens of Heaven, it means we are not citizens of the Empire. In the United States, the line between the two is blurred at best. During election seasons, it almost gets obliterated.

Let’s stretch our thinking on this. Let’s reflect on the Gospel implications. Let’s re-imagine our thoughts and words and re-cast them in the ways of our Lord and his cross, re-shape them in light of the new creation of his resurrection. May we be a people who receive one another as Christ receives us, who forgive others as we’ve been forgiven by God, and who love others as fearlessly and unconditionally as God loves us.

(Today’s post is #995. On the quickly approaching day of the 1,000th post, we’ll celebrate by holding a drawing to give away a bunch of books. The only way to enter the drawing is to “comment” on any of the posts between September 20 and the day of the drawing. You can enter one time per post, up to 14 total entries, but you can win only one prize. The grand prize is all three books of the John Mark Hicks series on the sacraments of the Church of Christ: Come to the Table, Down to the River to Pray, and A Gathered People. A total of eight books will be given away, all classics, all have had a profound impact on my thinking and preaching and writing. They are my favorites. See the September 21 post for the complete list.)