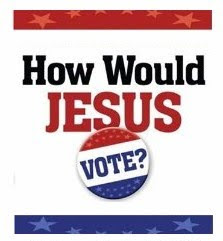 I posed a couple of burning questions yesterday regarding the way national politics seem to bring out the very worst in American Christians: 1) Why do we think it’s OK to speak and act and think in decidedly un-Christlike ways when we’re speaking against the people of a particular political party or acting in response to a political speech or thinking in terms of political gains and losses? and 2) If earthly politics fosters so much unchecked un-Christlike behavior in our Lord’s followers, why do we push the Church to get involved?

We’re using Bryan Roberts’ article “Seven Things Christians Need to Remember About Politics” as a guide for our discussion. His premise, that politics is the one area in which the sins of Christians are completely excused, is one with which I agree and one with which I have plenty of experience. I can’t tell you how many emails are sent and forwarded to me, almost daily, by some of the strongest Christians I know, full of slander and lies, insults and condemnation, threats and boasts.

And that leads us to the first thing Christians need to remember about politics:

“Both political parties go to church.” I’d say it a little differently, maybe. Christian brothers and sisters are in both political parties. Your own congregation is made up of Republicans and Democrats, flaming liberals and hard-core conservatives, moderates and extremists. If I’m wrong about this and only conservative Republicans go to your church, your church is doing something terribly wrong.

The political party lines in the United States are drawn in chalk. They’re constantly being erased and redrawn and they’re very easy to cross. And neither party’s shifting platform is perfect. You can’t say real Christians vote only Republican or a person can’t be a Christian and vote Democrat. Some Christians say we all have to vote Republican because Jesus is against the gay marriage position of the Democrats; other Christians say we all have to vote Democrat because Jesus is against the war policies of the Republicans. Some say the Church has to support Republicans because of Jesus’ teachings on abortion; others say the Church has to support Democrats because of Jesus’ teachings on the gap between the rich and the poor. This kind of thinking and talking and acting forces God’s people to choose between the lesser of two worldly evils. What’s a guy like me supposed to do? My personal commitments to following the King make me pro-life. I am pro-life to the max: anti-abortion, anti-death penalty, and anti-war. What party is pushing that political platform? How is a Christian supposed to choose between a party that kills God’s unborn children in the U.S. and a party that kills God’s born children in Afghanistan? I’ve got one set of politicians bragging about execution numbers and deporting immigrants and another set of politicians in bed with Hollywood and promoting safe sex education for our teenagers. A theologically-thinking disciple of Jesus would have a very difficult time honestly choosing one political party over another.

The Kingdom of God is not defined by worldly political parties and platforms and lines, and neither are its citizens. We must come to the realization quickly that in the U. S. there is not one righteous party and one evil party; there is not one good set of candidates and one bad set of candidates; there is not one Christian choice for President and one un-Christian choice for President. There is one single, massive, corrupt, and worldly system that is powered and motivated by the principles of this world and that the Kingdom of God is working right now to overthrow and conquer.

I would encourage you to never label a person who belongs to or supports “the other” political party, whichever party that is. Don’t insult them or threaten them. Don’t hate them or condemn them. One, those are decidedly un-Christlike things to do. Two, they might be a faithful brother or sister in Christ whose political choices are guided more by the Spirit of God than yours.