The Son of God!

“With a loud cry, Jesus breathed his last. The curtain of the temple was torn in two from top to bottom. And when the centurion, who stood there in front of Jesus, heard his cry and saw how he died, he said, ‘Surely this man was the Son of God!'” ~Mark 15:37-39 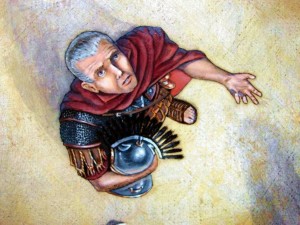 I know this Roman military commander saw the sky turn dark. He felt the earth shake. Maybe he received reports from inside the city about the temple curtain. Maybe he heard about the dead people walking around. Of course, that had an impact on everybody who was there that day.

But I think the centurion was mainly focused on Jesus. He was watching this King. When they insulted Jesus, Jesus blessed them. When they beat him, Jesus loved them. And when they nailed him to the cross, Jesus forgave them. The soldier saw how Jesus died. And it changed him. I think it turned his whole world upside down. Jesus is a King who died like a criminal. He was rejected and killed by the very people he came to save. He’s the mighty Son of God, but he never used his power for himself. Everything’s been reversed. Weakness is a sign of strength. Death is the means to life.

Jesus’ sacrificial death means that Caesar and all the values that Caesar’s world is built on are in trouble. It shows us that faithful obedience unto death, not mighty works of power, can convert even the executioner. God’s people are going to change the world, not with violence, but with love and sacrifice. The centurion not only changed his mind about Jesus, he must have also changed his mind about what it means to be a son of God. Divinity is no longer tied to the splendor and military might of the Empire. Divinity, eternity, lives where it doesn’t look like there is any splendor or might.

The power of the Empire is coercive. It forces others to submit, or else. Jesus’ death shows us a different kind of power. The power the centurion served crushes and destroys and turns life into death. The power of the cross gives itself for the sake of others and turns death into life.

At the beginning of Jesus’ ministry, at the waters of our LORD’s baptism, the heavens were torn apart and the Creator of Heaven and Earth declared, “This is my Son.” At his death on the cross, the temple veil ripped open and a representative of the most powerful nation in history made the same confession.

What set Jesus apart and what marks all disciples who follow him today is not his strength, but his weakness; not his majestic power, but his suffering; not his authority and rule, but his sacrifice and love.