(Commenting on this post automatically enters you into the drawing for the books to be given away in conjunction with this blog’s upcoming 1,000 post. Check out the details a few posts back.)

What distinguishes the love of Christ and marks the love of all disciples of Jesus is the willingness — no, the eagerness! — to condescend to meet the needs of others. Those being transformed by the Spirit into the image of our Savior are those who consistently imitate him by considering the needs of others more important than their own. They consider others better than themselves. They seek the interests of others ahead of their own. They are the ones who make themselves less important in order to show compassion to those around them.

Our Lord gave us the illustration for such an attitude. When he washed his followers’ feet around the dinner table on that last night, he provided the perfect example of sacrificial love. He showed them “the full extent of his love” and then commanded them to “do as I have done for you.”

What’s astounding is that Christ Jesus, the Holy One of Israel, the promised Messiah and Savior of the World, stooped down to make himself the least important person in the room.

There is no job beneath our dignity, there is no task beneath our pay grade, there is no calling that is under our position or status. Would it shock everybody in your office if they saw you taking out the trash? Would it be a huge surprise to your wife if she heard you loading the dishwasher? Would your neighbors gasp in disbelief if you swept up all the gunk in the alleys around everybody’s dumpsters? Would your children faint if you turned off your TV show to play a game with them? In the manner of our Lord, we are commanded to stoop, to condescend, to continually seek new ways to become the least important person in the room.

Now that the NFL lockout of the regular referees is over, we can look back and laugh at the miscues and botched calls, the uncertainties and the chaos that was life with replacements. We can giggle at the punny headlines of the past three days such as “FAIL MARY!” and “The Inaccurate Reception.” The funniest line I heard was on ESPN when on Tuesday one of the studio hosts noted that Russell Wilson was the first quarterback in history to throw a game-winning interception. The lockout provided plenty of fodder for late night talk show hosts and editorial cartoonists. 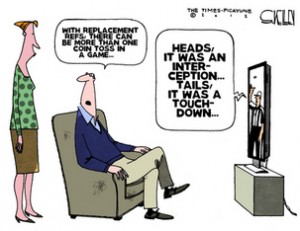 The greater tragedy during the past three weeks, though, has been overlooked. Something far worse has occured in the NFL that’s been overshadowed by the referee lockout and ignored by the national media. It’s brought untold shame and ridicule to a once proud franchise and threatens to undermine the integrity of the entire league. I’m talking, of course, about Jerry Wayne’s new Papa John’s pizza commercial in which the owner of the Cowboys actually raps! 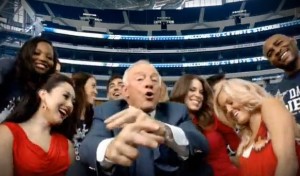 Words can’s describe the embarrassment I felt for the Cowboys, the NFL, the city of Dallas, and the whole great state of Texas upon seeing this commercial for the first time Monday night. It’s humiliating. Jethro rapping and rhyming and shucking and jiving right there in bold HD, jumping up and down stadium staircases, gesturing awkwardly with his hands, striking hilariously defiant poses, selling pizza and Pepsi. That’s the owner and general manager of the Cowboys.

“Yo! It lights me up like a roman candle! Toppings and flavor almost too good to handle!”

Note to Roger Goodell: now that you’ve got the regular refs back to work, please assess some fines and penalties against Jerry Wayne for actions detrimental to the league.