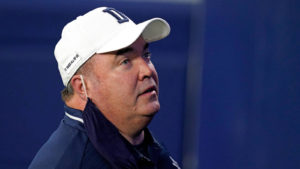 With the Buffalo Bills advancing to the AFC title game this year, here is an updated list of the NFL teams that have not won a divisional playoff game in at least 25 years:

Sixty-six years ago today, Edward Van Halen was born in Amsterdam. When he was seven, he and his family moved to Pasadena, California. Eddie and his brother Alex formed a rock band in 1972 and released the most iconic debut album in music history in 1978. And every rock-and-roll guitarist since has wanted to be Eddie.

In honor of the world’s all-time greatest guitarist, check out this video from a 1995 Van Halen concert in Toronto. And be amazed. When he breaks into “Cathedral” at about the 6:30 mark, be blown away that any human can make a guitar do that. Eddie Van Halen did not invent the electric guitar, but he owned it. Mastered it. Dominated it.