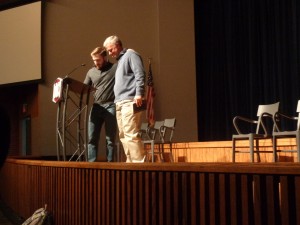 I had a great day at Oklahoma Christian University yesterday, catching up with some really old friends and maintaining connections with some more recent ones. It’s fascinating to walk into Hardeman auditorium and see Sheldon Adkins as a respected university counselor and Jeff McMillon as a respected Bible professor. Randy Roper — pardon me, Doctor Randy Roper — my play-by-play partner for all those Eagles basketball games, is the dynamic preacher for the Edmond Church of Christ. I know my own life has changed in so many wonderful ways since we were terrorizing the faculty and administration at OC back in the ’80s. Our God has faithfully shaped me and used me in ways I never could have imagined back then. To know he has done and is doing the exact same surprisingly wondrous things in others is a true blessing to my heart. We picked up with our conversation and connection like we had never left off, getting the scoop on mutual friends, re-telling the crazy stories that nobody would believe unless they had been there, laughing at the same things we laughed about twenty-five years ago. But there was added joy in the knowledge that our God saved us from ourselves and is using us to his glory and praise.

It was great to see Dillon Byrnes and Chandler Trader from the youth group back at Legacy. It was a true blessing to have Barrett Packard from our youth group here at Central introduce me to the OC chapel crowd and pray with me before I spoke. And the lunch at Alfredo’s with Adair, Randy, Barrett, and Dillon was a blast: old Delta guys in their late 40s with a couple of current Delta guys in their early 20s. And Randy.

Speaking at chapel at OC is nerve-wracking. I dread it. Tough room. Tough crowd. Impossibly high demands. I get the sense that 95% of the kids in the room don’t want to be there. I feel like none of them are listening (I know, I used to be one of those kids). Yesterday, though, seemed different from the other times I’ve spoken there. It seemed like they were paying attention yesterday, actually listening to the words of encouragement from the end of Romans 8 regarding God’s unconditional love for each of us. I wonder sometimes if the entire OC faculty and board of directors has to meet and vote first before I’m invited back to speak at chapel. I wonder if they call Terry Johnson or Richard Mock first, just to be sure they haven’t missed some kind of lifetime ban I’m under for some infraction committed in 1988. Regardless, I’m always grateful for the opportunity. And always blessed.

“There is one body and one Spirit — just as you were called to one hope when you were called — one Lord, one faith, one baptism; one God and Father of all, who is over all and through all and in all.” ~Ephesians 4:4-6 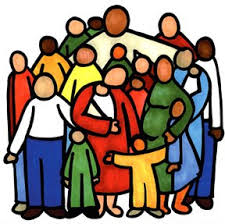 We’re in the beginning stages of exploring together the Apostles’ Creed here at Central. We just introduced it to our congregation last Sunday and we’re jumping into the first line together this Sunday, returning to each of the different lines in order once a month through the end of the year. I’ve received much encouragement this week since that introductory sermon in the form of emails and texts and even pictures. Some of you have placed the creed on your refrigerators, some of your children are drawing and painting the lines of the creed and hanging them up in their rooms, lots of you are wondering why you’ve never heard of the Apostles’ Creed before. Your excitement and energy about this is giving me much energy and excitement. Thank you.

In the last post here I wrote about using the Apostles’ Creed as a way to maintain theological balance. Today, let me suggest that memorizing and saying the creed together also reminds us that we belong to the historical community of all disciples of Jesus for all time. We are a part of the one body. We belong to the one called people. We confess the one faith and we are all children of the one God.

You say the pledge of allegiance or you sing the U.S. national anthem and it connects you to a people that were founded 240 years ago. We say the Apostles’ Creed and it joins us to an eternal people who were founded and shaped by the death, burial, and resurrection of Jesus Christ.