Stone-Campbell and the Civil War

In an effort to raise our “spiritual historical consciousness,” our Sunday morning Bible classes here at Central are studying Doug Foster’s “Renewing God’s People: A Concise History of Churches of Christ.” We’re hoping this study will help us see that so much of what we believe and practice was shaped by outside factors of history and culture. The Christian faith was passed on to each of us by someone, as was our particular brand of Christian church. To acknowledge that it’s always affected by cultural and historical forces is to become more humble and less judgmental of others, to see God’s work and God’s Kingdom in much bigger and broader ways, and to rely more on his mercy and grace that saves us.

This past Sunday, we took a close look at how the Civil War divided the Stone-Campbell unity movement between churches in the North and churches in the South and, eventually, between the Disciples of Christ and the Churches of Christ. For the past hundred years, we’ve largely denied that the War Between the States had anything to do with it. We have very smugly contested that our differences are doctrinal, over right belief and correct practice, about biblical interpretations and church structures. Ah, that kind of thinking and talking is why we need these kinds of studies.

In 1860, there were about 1,200 Stone-Campbell congregations in the north and about 800 in the south. And the closer the nation came to war over the issue of slavery, the more the opinions of church leaders were expressed. Alexander Campbell detailed his position in a series of eight articles in his Millennial Harbinger. He claimed that Scripture regulated slavery, it didn’t abolish it. He wrote that the Bible did not condemn slavery as sinful or immoral. And, perhaps influenced by his fellow Virginian Thomas Jefferson, Campbell conceded that slavery just wasn’t in harmony with the spirit of the age or the advancement of society and so supported plans to end slavery gradually without disrupting business. On the other hand, Barton Stone had freed all of his slaves years earlier and was an active member of the American Colonization Society.

The Stone-Campbell churches didn’t have a national organization or governing board to approve policy and regulate disputes. But they did have the American Christian Missionary Society, headquartered in Cincinnati. Their annual meetings had always drawn church members from all over the country. But when the Civil War began, southerners were no longer able to attend. At the October 1861 meeting, a resolution was introduced calling on all the Stone-Campbell churches to support the Union:

“Resolved, that we deeply sympathize with the loyal and patriotic in our country, in the present efforts to sustain the Government of the United States. And we feel it is our duty as Christians to ask our brethren everywhere to do all in their power to sustain the proper and constitutional authorities of the Union.” 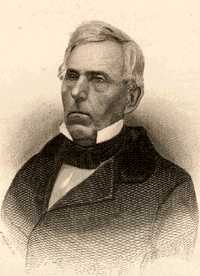 Tolbert Fanning published a strong response to the resolution in the November issue of his Nashville-based Gospel Advocate:

“Should we ever meet them in the flesh, can we fraternize with them as brethren? How can the servants of the Lord in this section ever strike hands with the men who now seek their life’s blood? We do not know how this matter appears to others, but without thorough repentance, and abundant works demonstrating it, we cannot see how we can ever regard preachers who enforce political opinions with the sword, in any other light than monsters in intention, if not in very deed. How can Christian men of the South do otherwise?”

As would be expected, the feelings of bitterness and anger didn’t subside with the end of the war in 1865. David Lipscomb wrote in a February 1866 Gospel Advocate article that the Missionary Society had spent the past four years “encouraging the work of Christians North robbing and slaughtering Christians South.” He accused the organization of “inducing the followers of the Prince of Peace to become men of war and blood.” With similar sentiment in the same publication the following month, Lipscomb claimed that the society “without evidence of a repentance of the wrong, should not receive the confidence of the Christian brotherhood.”

It is naive at best and dishonest at worst to claim that anyone in America before, during, and after the Civil War could have remained unaffected by it. Foster writes in Renewing God’s People:

The war created two very different moods in the country — one in the North and one in the South — that no one could escape. Northerners had won the war. There was a general sense of victory, progress, and prosperity, mixed with a desire to punish or rehabilitate the South. Southerners had been defeated. To survive, they interpreted their defeat as discipline from God to keep them from becoming like the materialistic North and to preserve their virtues as an example of God’s ideal culture. Thus, it was not just the war but its aftermath, particularly Reconstruction in the South, that broke Christian fellowship. After the war, many churches in the prosperous northern cities became successful in society. They built large buildings with expensive stained glass. They preferred educated ministers. They could even afford expensive organs for their new buildings… By contrast, Southern members faced starvation, disease, and economic ruin… To Southerners, it was inconceivable that their fellow Christians in the North could spend money on buildings and organs while their brothers and sisters in the South were struggling just to stay alive.”

Yeah, it was real.

Doctrinal issues are usually not just doctrinal issues. Stone-Campbell church leaders had refused to allow any differences in theology or church structure or worship practice to divide them. Though some disagreed with the need for a missionary society and some adamantly opposed it, it was never allowed to divide the churches. Until the Civil War.

The ways we think and behave, what we believe and how we practice, is passed on to us in a specific culture during a particular point in history. We’re affected by it. It shapes how we view our churches and how we view others. Can we at least acknowledge that? Then, by acknowledging it and trying to better understand it, won’t we be more humble? Won’t we be less judgmental? Won’t we be more patient and accepting, more kind and forgiving?