Most people who reject Christianity are not saying “no” to God, they’re saying “no” to the God they see reflected in religious people. They’re not turning their backs on Jesus, they’re turning their backs on the Jesus reflected in a lot of his disciples today. There are many, many people in the world whose only encounter with God is going to be in an encounter with God’s children; their only exposure to Jesus is going to come in an interaction with a Jesus-follower. And a lot of the time those very encounters lead to a rejection of Christianity. When that happens, I have a hard time blaming them.

Eric Metaxas, the truly gifted author of Bonhoeffer, talked about this in his speech at last year’s National Prayer Breakfast in Washington, D.C. His claim — I feel like I’ve been preaching this for years — is that if people really, really, really knew God, there’s no way they’d say “no.” If the world knew God, and not the false ideas about God that his children keep putting out there, the world would break down our church doors and smash through our stained glass windows to get to him. They’d line up around the block!

“God is not some moral code. He is not some energy force. He is alive, he is a person. He knows everything about me. And about you. He knows my story. He knows your story. Every detail. He knows your deepest fears. He knows the terrible selfish things you have done that have hurt others. And he still loves you! And he knows the hurt that others have caused you. He knows us. He is alive. He is not a joy-killing bummer, or some moralistic ‘church lady.’ He is the most wonderful Person — capital P — imaginable! In fact, his name is Wonderful…

Now who would reject that?

I had rejected that. But guess what? Jesus had also rejected that. He had railed against that. And he called people to real life and real faith. Jesus was and is the enemy of dead religion. He railed against the religious leaders of his day because he knew it was all just a front. That in their hearts they were far from God, his Father. When he was tempted in the desert, who was the one throwing Bible verses at him? Satan. That is the perfect picture of dead religion. Using the words of God to do the opposite of what God does. It is grotesque, when you think about it. It is demonic.”

If people don’t know you as gracious and compassionate, if your friends don’t use words like patient and kind to describe you, if your next-door-neighbor and your insurance agent don’t think you’re abounding in love, then they may not have much of a chance of really knowing our God. If they know you’re a Christian and they also know you as judgmental, bitter, unforgiving, unkind, or untruthful, we can’t really blame them for staying home on Sunday mornings. 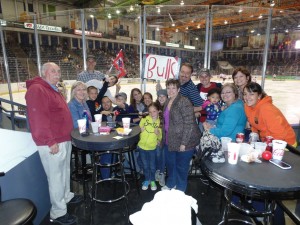 The Amarillo Bulls swept the Tornado down-state in Frisco last night to advance to the Robertson Cup Finals for the third straight season. I like to think it was the Central Church staff that got the Bulls off on the right foot in the Conference Championship series opener last Thursday. Thanks to Elaine’s connections — oh, yeah, Elaine is truly connected! — we were all there from puck drop to final horn, right up on the glass, in the VIP Party Zone. 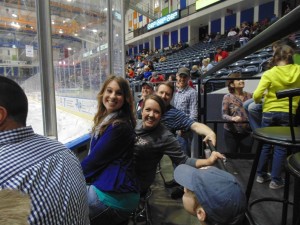 It was crazy. Tanner banging on the glass and screaming God’s love to the Tornado goalie. Hannah shouting her phone number to the referee. Gina putting her new knees to the test by dancing wildly to all the ’80s rock anthems. Greg continually threatening to take off his shirt.

Elaine had rigged it so that we were the ones competing on the ice during the intermissions for cheesy little Bulls memorabilia and prizes. Kathryn won the contest in which we had to run barefoot from one end of the ice to the other, collect our scattered shoes, and run back. Of course, being born in Arkansas was an unfair advantage for her. And I think Adam and Corbin won the water balloon toss. Or was it Mean Jean and Becca? I can’t remember. I was completely distracted by the spectacle of Adam in that terribly undersized hockey helmet.