They never quit. They never gave up. They never stopped fighting. They suffered more than a couple of major physical and mental breakdowns on both sides of the ball — substitution penalty, defensive holding, clocking the ball on that last drive — and they were playing one of the greatest 4th quarter quarterbacks in league history, but the Cowboys never threw in the towel. Give ’em that.

When Green Bay went up 21-3 early in the 2nd quarter, it looked like the rout I figured it to be. Rodgers was having his way with the Dallas secondary and the whole Cowboys defense was already worn out. Down by 18, Dallas couldn’t run Ezekiel Elliott like they needed to and the offense, which was going to be the only hope against the Packers, was reduced to one dimension. Even after Dak Prescott marched the Cowboys down the field and hit Dez Bryant with a touchdown that made it 21-10, Rodgers answered right back in a way that would have sunk most other Cowboys teams.

But the Cowboys kept fighting. I’ll give ’em that. 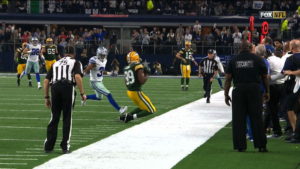 What a wild finish to the most entertaining playoff game of the Divisional Round weekend. A combined 24 points scored in the 4th quarter by the Packer and Cowboys, including three field goals of more than 50-yards in the final 93-seconds. Dallas scored 18 points in the 4th quarter to erase a 15-point deficit. But it was Rodgers hitting Jared Cook on 3rd and 20 with a 35-yard pass down the very edge of the left sideline that doomed Dallas to another epic failure on the playoff stage. That astonishing pass and catch set up the 51-yard field goal that won the game as time expired — that’s the play we’ll see on the highlights over and over again until Green Bay gets knocked out or wins the Super Bowl. But I think it was the play before that clinched it for the Packers.

How did Rodgers hang on to the ball on the Jeff Heath sack?!?

Heath blitzed from Rodgers’ blind side and blasted the Packers quarterback, tomahawking his right arm to knock the ball free. Rodgers didn’t see him coming — he had no idea he was about to be hammered. He didn’t see Heath, he didn’t feel Heath, he didn’t sense it coming at all. And in the instant before Heath made contact, I jumped off the couch, threw my arms over my head and screamed in agony: “No! No! No!”

I just assumed Rodgers fumbled. No quarterback in the league survives that kind of sack without losing the ball. It was impossible. It never occurred to me that Rodgers would hold on to it. He fumbles there and, if the Cowboys recover, they’re on the Green Bay 32-yard line and Bailey wins it with a field goal. Automatic. Heath becomes the improbable hero and the Cowboys win the game.

I’ll never know how Rodgers did not fumble that ball. It’s beyond my comprehension. But he calmly gets up, calls the timeout, hits Cook with another play-of-the-day pass, and watches calmly as Crosby hits the game-winner. Green Bay travels to Atlanta for another NFC Championship Game and the Cowboys still have not won a Divisional playoff game in 21-years. And counting.

Let me make two observations about the Cowboys and be done for the day.

One, it looks like the Cowboys have something really good in Prescott. Maybe. You can get in trouble for anointing a legend before his sophomore year is complete. Dak is a rookie playing the easiest schedule in the league with zero expectations. If you’re one of the few Cowboys fans who hasn’t purchased a Dak jersey yet, you might hold off until the end of this upcoming season. Everybody’s got film on Prescott now and the expectations are high and next year’s schedule will be against division winners, not cellar dwellers. Having said that, this team really responds to Dak. They follow him, they believe in him. The defense plays better after Prescott does something exciting, the line blocks better because he doesn’t get sacked or throw interceptions, the receivers jump higher, the coaches coach better. It all snowballs in really fun ways around Dak Prescott. For now.

Second, you can look at Dallas and see reflections of 1991. It was that season, Emmitt Smith’s second with the team, that you sensed something really special was building. The Cowboys — really young, really dynamic, fun personalities, unique talent, and top picks at three key offensive positions — won a playoff game that year for the first time in nine seasons and then got obliterated in the Division Round. But it felt like something great was happening. The core players were in place, the chemistry was perfect, the next level was just around the corner. Sure enough, Dallas won the next two Super Bowls and made it look fairly easy. 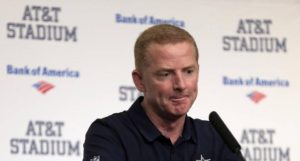 There are a few similarities between this team and that one. With one glaring difference: This team is coached by Jason Garrett and that one was coached by Jimmy Johnson. That team was put together by Johnson and Lacewell and this one is run by Jones and Jones. So, yeah. There’s really no reason to be optimistic.

If you’re a Cowboys fan, this surprise 13-3 season, the number one seed in the conference, and an exciting loss in the Division Playoff is probably as good as it’s going to get.