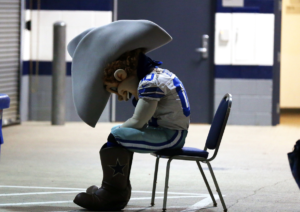 The Dallas Cowboys, owners of the best regular season record in the NFC and the top seed in the playoffs, will not win their Divisional Playoff game this Sunday against the Packers. It seems almost impossible to me. I know Dallas routed Green Bay at Lambeau Field earlier this season. I know Jordy Nelson has two broken ribs and a collapsed lung and Ty Montgomery’s knee is held together by duct tape and bailing wire. I know the Cowboys are healthy and rested and playing at home. Here are a few other things I know:

Jason Garrett is the Cowboys coach. Garrett is not known for making in-game adjustments. He’s incapable of changing things on the fly. If the Packers show Dak Prescott any kind of defensive set he hasn’t seen before, Garrett will be no help.

Dak Prescott is the Cowboys quarterback. Yes, he’s in the running for NFL Rookie of the Year. Yes, he’s made all Cowboys fans forget Tony Romo and every other Dallas signal caller since Troy Aikman. But he’s a rookie. Prescott is a rookie. There have been 50 Super Bowls. One hundred starting Super Bowl quarterbacks. Not one single rookie. This is not a regular season game. This is the Divisional round of the postseason against a Packers team that knows how to peak at the right time — Green Bay streaked to the Super Bowl as a sixth seed just six years ago. Dak is smart. I love that Dak seems to never throw interceptions and never take sacks. But another reason for his wild success this year is that he has about seven minutes to sit back in the pocket and throw. Prescott never really has to check down to his second or third read. He locks his eyes and his body on that primary receiver and just waits for him to come open. He won’t have that luxury Sunday. Clay Matthews, Julius Peppers, and Nick Perry will be joined by blitzing nickel backs and safeties and linebackers to insure that Dak is rushed into checking away from his number one target and making quicker decisions and quick throws.

Aaron Rodgers is the Packers quarterback. I don’t need to say much here. Rodgers has willed Green Bay to seven straight wins and he is always at his best after Christmas. Never mind that Nelson won’t play. When Jordy went down at the beginning of the second quarter against the Giants last week, Rodgers went on to throw for 330 yards and four touchdowns and score 38 points against a defense that’s a whole lot better than what he’ll face at AT&T Stadium.

Green Bay has momentum. The Packers have won seven straight games in seven straight weeks. The Cowboys have lost two of their last four games, the starters haven’t played a real game together in almost three weeks, and Dallas is averaging only 21 points in their past five games. 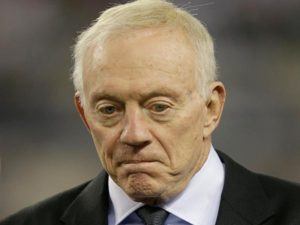 Jerry Wayne is the Cowboys owner. Since Jones fired Jimmy Johnson for winning back-to-back Super Bowls, the owner has made it clear that winning Super Bowls is not his top priority. Consider the evidence: the Dallas Cowboys have not won a divisional round playoff game since the 1995 season. That’s twenty-one years of postseason irrelevance. How everyone expects that to suddenly change with a rookie quarterback, a rookie running back, a prima donna receiver, an average defense, and an overmatched coach is beyond me. I know, I know: They went 13-3! Don’t forget they played a last place schedule this year, the easiest schedule in the NFL. Coming off that 4-12 fiasco and losing Romo in the preseason meant the slate was easy and the expectations were zero. No pressure. They beat a lot of really bad teams. The Packers are a really good team. This is not mid-October. And the football gods are not going to let Jerry Wayne grin his way to a conference championship game.

The strategy for both teams is going to be to control the ball to keep the other team’s offense off the field. Ezekiel Elliott ran wild at Lambeau earlier in the season. And that’s going to be the Cowboys’ only shot this Sunday. Of course, Green Bay will follow the Giants’ blueprint and do everything to contain Elliott and force Prescott to beat them. And he might. Green Bay’s corners were leaving New York’s receivers open all day in the Wild Card round and, but for a dozen dropped balls, we might be talking about Eli Manning today instead of Aaron Rodgers. New York’s defensive secondary is far superior to the Packers’. However, I think they’ll get enough pressure on Prescott up front to negate the weakness.

It’ll be a low-scoring game. Lots of running. Maybe fifteen punts. Under three hours. Green Bay will take it 23-17. And Jimmy Johnson will purse his lips, clap his hands four times, and giggle quietly to himself.