Our God Is So Big!

Our younger children sing a fun song — one of those with hand motions and everything — about the enormity of our God.

That about sums it up. Simple words. Broad concept. But, what else could we possibly say? Those who’ve actually seen God and then tried to describe him didn’t do much better. 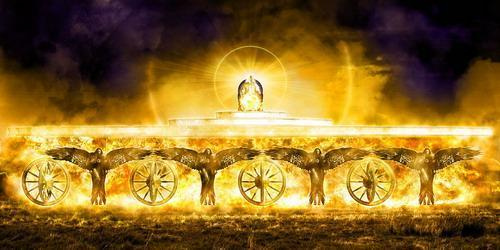 It reminds me of the leaders of Israel returning from a communion meal with God on the mountain. They had just shared food and drink with God. And they tell the people, “Under his feet was something like a pavement made of sapphire, clear as the sky itself” (Exodus 24:10). See how our words stop at the pavement.

God is completely outside our categories. To try to describe him in human terms is always to fail. It’s futile. That’s why it was necessary for God to translate himself into our terms by coming to the world as one of us in Christ Jesus.

And the song’s pretty good, too.

There are 69 days left until the Dallas Cowboys kick off their 2009 season against the Bucs in Tampa Bay. And we’re counting down those long summer days with the Red Ribbon Review, a look at the second-best players in Cowboys history according to jersey number. We’ve got to catch up today on what we missed over the holiday weekend. While you were in the pool and grilling out and watching fireworks with friends and family I was considering…

…the second-best player to ever wear silver-and-blue number 71: Willie Townes. An original member of the front four of

the famous Doomsday Defense of the late 60s, Townes played only 2-1/2 seasons in Dallas. But they were meaningful. Townes anchored the left tackle position from 1967-68, helping the Cowboys advance to two straight NFL Championship Game losses to the Packers. Heart-breaking losses, yes. But he was a critical part of those “Next Year’s Champions” teams. It was his hit on Bart Starr in the Ice Bowl that forced the fumble George Andrie ran back for a score. Backup offensive lineman Andy Frederick deserves honorable mention for his reserve role on the Super Bowl teams of the late 70s. But Townes gets our second-place nod today. He only played 32 games in his super-short NFL career. But it was foundation-type stuff.

Our Also-Ran at #70 is a guy who made a successful NFL career out of deep-snapping for punts and kicks, the very likeable Dale Hellestrae. Drafted by the Bills out of SMU, Hellestrae came to Dallas in 1990 and stayed for 11 years. He snapped in 176 games, 21 of them in the postseason. And he collected three Super Bowl rings along the way. He was a novelty, for sure. But he revolutionized the deep-snapper position. You can probably only name one deep-snapper in NFL history. And only one who ever had his own radio show. Helle’s the guy!

At today’s #69, I give you backup center Ben Fricke. Fricke came out of Houston and played in Dallas for three seasons, 1999-2001. He only appeared in 16 games for the Cowboys. And I can’t find a picture of the guy to save my life. Here’s a link to his stats. Go ahead and click it. It won’t take long.