A good friend of mine texted me during the 11th inning last night with this: “Next season I’m rooting for the Dodgers; cheering for the Rangers is taking years off my life!” 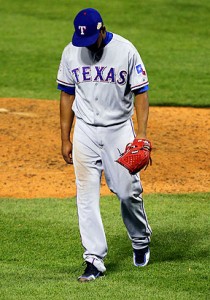 What a devastating loss. Gut wrenching. Heart breaking. I’ve never agonized through anything quite like it. Never. Not once, but twice, the Rangers were one strike away from capturing their first ever World Series crown. The families of the players had already been ushered by stadium officials to a special section near the visitors’ dugout in order to participate in the celebration. The champagne had already been wheeled into the visitors’ clubhouse. Plastic sheeting was hung over the lockers. Tony LaRussa had already reminded his players and coaches to “act right by the fans” and show your appreciation for them when the game’s over and the Rangers are celebrating on the field. The Texas players — twice!! — were all poised on the top steps of the dugout, preparing to leap the rails and exult in the sweetness of the championship.

I feel like it’s over. I feel like they lost it last night. I feel hopeless. Right now, this morning, I cannot imagine for the life of me any possibility that the Rangers may become the first team since the 1979 “We Are Family” Pirates to win a World Series Game Seven on the road. I can’t see it. I can’t believe in it. Last night was too much. Too tough. Too emotionally draining. Too mentally exhausting. Too horribly wrong. How do you come back from that?

Give the Cardinals credit. I do. They never quit. The same things we love about this Rangers team, St. Louis exhibited all over the place last night. Never say die. Keep chipping away. Keep believing. Keep working. Never give up. Never quit. They were down to their last strike twice. The team that appeared to be the most rattled actually came up with the clutch hits under the most pressure. They were spectacular.

I have two questions, though, that I’m afraid will haunt all Rangers fans and perhaps hang over this franchise for the rest of my life: How did Nelson Cruz allow that ball to go over his head and why was Mark Lowe pitching at all?

I’d have much rather seen you out there pitching for Texas than Mark Lowe. I can’t understand why Ron Washington would have Colby Lewis bat with the bases loaded earlier in the game, and then pull Feldman for German with one runner on first and two outs at a much more critical spot. And to have a ball go over your head with a two-run lead in the 9th inning is inexcusable. It’s like a safety with a five-point lead getting burned deep for a touchdown pass on the last play of the game. You don’t allow anything behind you. Or over you. Even with a bad jump on the ball, Cruz has to be positioned at the beginning of the play so that never happens. (Tom Verducci writes eloquently about this and analyzes some of the history the Rangers are up against now right here.)

The Rangers are the first team in World Series history to suffer three blown saves in one game. How do you come back from that? I don’t think it’s possible. Then again, the Rangers haven’t lost two games in a row since the middle of August. They are 14-0 after losses since August 23, 46 games without back-to-back Ls. They do know how to bounce back. (Click here for a pretty good column by Richard Durrett about Ron Washington and Michael Young trying to keep the team encouraged and confident in the aftermath of the horrendous meltdown.)

Today’s date has been marked on my calendar for three months. Amarillo High plays Tascosa tonight. It’s the biggest high school football rivalry in the entire panhandle. (Am I supposed to capitalize “Panhandle” when I’m referring to the region? I don’t know about that yet.) People drive in from all corners to watch this game. Bivens Stadium will be packed. I’ve been hearing about this game for years. I talked about it when I did the TSN Friday Night Scoreboard with Roger Emrich ten years ago. If the Sandies win tonight, they clinch a playoff spot. It’s a big game. It’s a community event like no other.

But I’ll be in #1622, on the microfiber couch, in front of the TV, hoping beyond hope that the Rangers can bounce back one more time. Hoping that the Rangers have one more huge surprise left for us. There will be other AHS-Tascosa football games. There will be one next October, in fact. But there may never, ever be another Rangers Game Seven in the World Series. Eight months ago, 30 teams and their fans dreamed of being in a Game Seven in the World Series. There are two teams left. And Texas is one of them.

It’s helping me to read Jamey Newberg’s Report today. I’ve read it twice. It’s good. It’s inspiring. If you’re a Rangers fan, I encourage you to click here and read his short column. It’ll take you two minutes. It captures very well some of the misery of last night. And it encourages a healthy and positive perspective on tonight. I’ll read it a few more times. I may print it off and put it on my wall.

Maybe I’ll feel better about things by the time the game begins. But, right now, I feel like it’s over.