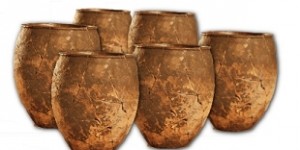 Paul says Christian ministry is a spectacular joy and a debilitating hardship. When he’s talking about ministry, Paul describes both blessing and suffering. And it’s not an oxymoron, like “jumbo shrimp,” in which the two words in a phrase cancel each other out. It’s not “rap music.” Or “military intelligence.” Or “random order.” Blessing and suffering actually always go together in Christian ministry.

Throughout all of 2 Corinthians, Paul says over and over that the power of God is not proven by the absence of pain. God’s approval, his work, is not seen in the absence of suffering. It’s Paul’s faithful endurance in the middle of the pain, his faithful perseverance in the middle of suffering, where God does his greatest work. And in the above passage, Paul says something quite shocking: Many people are made rich through his suffering.

This is the reality that transforms his ministry. He knows that the all-surpassing power is from God and not from us. He’s convinced that God’s power is made perfect in our weakness. He’s sold on the fact that Christ’s grace is sufficient and that God does his best work in the midst of howling emptiness.

We are called to live for others as the very embodiment of the One who died for us. That’s going to involve suffering. And Paul understands that suffering makes him more like Christ — it imitates, in a way, the death of Jesus on the cross. God works through our sufferings, in a way, to save others.

Paul says his personal poverty, by the grace of God, is making many people rich. He has nothing, he says, and yet, because he sees the eternal significance of his hardships, he says “I have everything.” Poor. Yet making many rich.

Then, two chapters later, Paul reminds us: “You know the grace of our Lord Jesus Christ, that though he was rich, yet for your sakes he became poor, so that you through his poverty might become rich.” (2 Cor. 8:9)

Paul makes the connection: God works through us for the sake of the world in very similar ways as he worked/works through Christ Jesus. Our Lord did his very best work, he accomplished the greatest event in the history of mankind, in the deepest and darkest shadows of suffering and death. Your suffering, your poverty, right now by the grace of God, is accomplishing similar things for a desperate and dying world.