We made the right call, leaving Amarillo late last night and arriving at Gram’s new house in Arlington at about 3:45 this morning. The wind was raging at 30-40 mph from the north and we ran through a lot of snow between Clarendon and Childress. But after that, it was mostly rain. Talking to our friends back home, it sounds like it would have been impossible to try to make the drive today. I-40 is closed from Soncy on the west side of Amarillo all the way past the New Mexico state line and closed on the east side from Highway 287 to the Oklahoma border. You can’t get in or out right now. 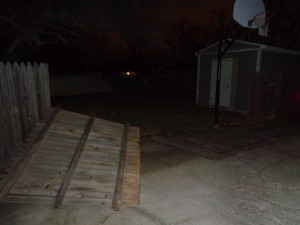 Right before we left, the winds tore down two fence posts and three fence panels in our driveway/back yard. I just left them there — didn’t even try. It was 24-degrees, the wind was blowing, it was dark. Ted. The way that garage area and driveway work, I’m sure the snow drifts have covered up the gaping hole. 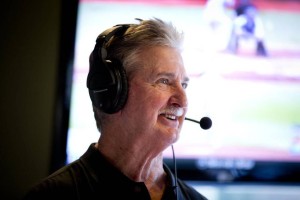 It’s good to be in Tarrant County today, to read the Fort Worth Star-Telegram and see my friend Randy Galloway’s last ever sports column. Randy has been writing and talking sports in Dallas – Fort Worth for 50 years. He was writing a daily column for the Dallas Morning News when I first began paying attention to sports. I was eight or nine years old, our family took the Dallas Times Herald, and I was reading Skip Bayless and Blackie Sherrod. I can’t remember when or where I first saw a Galloway column. I can’t remember what I particularly liked about it or why I began riding my bike to the 7-11 on Bruton Road to buy my own 25-cent copy of the Morning News so I could read him. But I do remember going out of my way to read Galloway.

When I started roofing houses with Glen Burroughs in the 8th grade, we listened to Galloway’s “Sports at Six” every evening on WBAP. Randy Galloway kept us entertained during the stretch run of those hot fourteen hour days on those roofs. He knew the players and the owners, he hung out in the locker rooms and clubhouses, he told great stories and painted vivid pictures. He wasn’t doing three minute sportscasts like Verne Lundquist and Dale Hansen, he was doing a three hour talk show! And I loved it. Brad Sham was my hero — I very much wanted to be the next play-by-play man for the Cowboys. But while Brad’s “Sports Central” show on KRLD was just as insightful and inside-ful as Randy’s, I always found Randy to be more entertaining. He told it like it was, just the way he saw it. And he wasn’t afraid to stir things up.

During the early stages of my mediocre radio career, I was blessed to meet Randy on the sidelines at Cowboys training camps and in the press box at Rangers games. He came on as a guest on my shows any time I ever asked. Always accessible. Always open. Always generous. Very generous. And supportive. Helpful. I felt like I had arrived when Randy Galloway knew me and called me by name.

My first official gig in Dallas radio was filling in for Chuck Cooperstein’s “Midnight Run” show on WBAP when he was doing NHL playoff games on national radio. Ted Sorrells got me that job and, a few months later, the interview with KRLD where I finally landed. The “Midnight Run” was the sports talk show right after Galloway’s. Sitting in the break room with Galloway and Ted in-between our two shows and sharing ideas about sports and life with this legend is a career highlight for me.

The moment Galloway became a friend, though, was about halfway through the 2003 Cowboys football season. I got myself into a fairly heated argument with Bill Parcells during a very public press conference following a Monday night game in Seattle. I was asking questions about a couple of two-point conversion attempts from the night before, Parcells was talking all around my questions, and I wasn’t getting the answer I needed. I pressed and, as Parcells does, he resorted to insults and name-calling and condescending behavior, questioning my football intelligence, my professionalism, and my motives. I was nervous to be in an argument with the coach of the Dallas Cowboys with all the recorders and cameras rolling. But I was there to do my job. My heart was racing as we went back and forth, but I held my ground. At one point in the proceedings, Parcells abruptly ended things, turned to Jennifer Engle, a Star-Telegram columnist, began to answer her question, and then sharply turned back towards me. “Did you get what you needed?!? Did you get your quote?!?” I said, “I’m not looking for a quote, Coach, I’m looking for a straight answer.” He snorted a final insult and our nearly four-minute exchange had concluded.

Immediately following the press conference, I was overwhelmed with reporters and cameramen congratulating me on standing up to the Big Tuna. You stood up to him! No one’s done that yet! You’re the first one!

I went to the locker room to interview a few players before leaving Valley Ranch for my own show that started at 3:00pm. And my media counterparts couldn’t stop talking about what had happened during the Parcells presser. I started to get nervous. Ric Renner told me he was going to air the whole thing from start to finish on Fox Sports Southwest. What had I done? Was this bigger than I realized? I remember getting into my truck and hearing Galloway’s voice on ESPN Radio taking my side and defending me and my actions in that press conference. Before I even got out of the Valley Ranch parking lot, he was already talking about it. He was replaying the audio from our “incident” and defending me. “I know Allan Stanglin,” he said. “Allan’s a good friend of mine. He was doing his job. He didn’t have any evil intent. He wasn’t trying to stir anything up. He was asking legitimate questions about inconsistencies in the coaching decisions during the game. This is all on Parcells.”

I’ve thanked Randy many times for that. It meant the world to me that he called me his friend and that he defended me and the way I went about my job.

Randy Galloway is a wonderful columnist, a terrific talk show host, and a fabulous human being. I consider it a great privilege to have worked with him and around him, a true blessing to know him. And an honor to call him a friend.