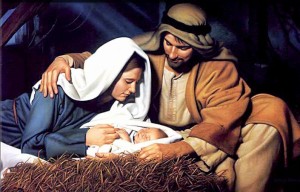 The Incarnation is a remarkable and powerful thing: God chose to come into this world the same way all of us come into the world — through the pain and water and blood of human birth. Just like you and me, God was born. God came here as a baby. The Gospel of John says the Word — the creative Word of God, the creation power of God — became flesh and made his dwelling among us.

God with us. Immanuel. He came to us. God came here to live with and to bless his creation. And it’s not just a beautiful idea or an abstract theological truth. It really happened on that clear starry night in Bethlehem.

But what do we do with this? We rejoice and we express thanksgiving, yes. We join heaven and earth in praise and worship, absolutely. But we don’t really understand it. God Almighty, the Creator of Heaven and Earth, coming to this world as a helpless baby — that blows our minds. We don’t really have a category for that.

So, usually, we kind of chop Jesus up. Fully human and fully God, we don’t know what that means. So we say everything in the Bible about Jesus’ weakness and pain and suffering points to his humanity, and everything in Scripture about his wisdom and power and authority points to his divinity. But if that’s the case, the coming of Jesus doesn’t really tell us anything new. It’s nothing to sing about. We don’t need Jesus to tell us that God is big and powerful and strong and that human beings are little and weak and powerless. We already know that. We already believe the relationship between God and humans is about above and below, about superior to inferior, about master to servant. We already believe that.

Well, that’s not what the baby Jesus is about. Immanuel, God with us, is about the shocking reversal of everything we believe about heaven and earth. It’s not about big God and little humans. It’s not about the Creator asserting his divine greatness and power in contrast to human weakness. This is about God becoming weak and powerless so that humans can become affirmed and exalted. It’s about God lowering himself so his creation can be lifted up.

Irenaeus, in the second century, wrote: “Jesus Christ in his infinite love has become what we are in order that he may make us entirely what he is.”

Jesus prays to his Father the night before his death, “I have given them the same glory that you gave me!”

God did not create heaven and earth to get joy or to receive love. He created in order to share his joy and love. Yes, all of creation is an explosion of God’ glory. All of heaven and nature point us to God’s goodness and beauty, his power and love. But he didn’t do it so we would believe in him. He doesn’t do it for our inspiration or spirituality. He does it because he wants to share his joy and love.

So he comes to us in Jesus. He joins us as a baby. He shows us in the birth of the Christ that his Kingdom is not founded on bloodlines or race or nationality or money. His nature is not about power or strength or violence or war. God’s character, what he’s all about, is grace. He and his Kingdom come to us as a gift of his amazing grace.

“He came to that which was his own… To all who received him, to those who believed in his name, he gave the right to become children of God — children born not of natural descent, nor of human decision, or a husband’s will, but born of God.” ~John 1:11-13

We’re not born into the Kingdom like we have some special birthright or like we’re entitled in some way. We’re adopted into the Kingdom. We are given our eternal rights and blessings by grace. It’s a gift. Jesus was the Son of Mary by faith, yes, and by water and blood. But first, he was her son by divine grace.

Joy to the world, the Lord is come! Let earth receive her King! Let every heart prepare him room, and heaven and nature sing!