His Presence is the Proof: Part 3 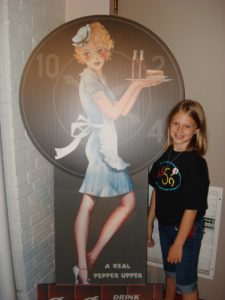 I asked Valerie last night if she did anything special for her 21st birthday. She told me that she and one of her good friends, Paige, had gone to Chick-Fil-A for lunch and Valerie had a Dr Pepper for the first time in over a month. See, Valerie is trying to eat healthier, she’s trying to exercise more — just like her old man, she’s really good at it during January and February. She ordered a water with her lunch, but Paige told her, “No, you’re getting a Dr Pepper.” Valerie replied, “I want water.” Paige insisted, “No. You want a Dr Pepper.” So, she got one. And it was amazing. I told Val, “You know, a lot of dads worry about their daughter turning 21 and looking for beer. You’re just craving a Dr Pepper.” She answered, “I love the burn.” Good kid. 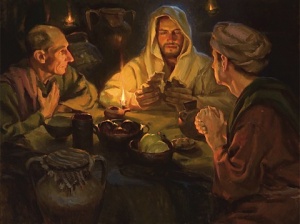 “He said to them, ‘How foolish you are, and how slow of heart to believe all that the prophets have spoken! Did not the Christ have to suffer these things and then enter his glory?’ And beginning with Moses and all the Prophets, he explained to them what was said in all the Scriptures concerning himself. As they approached the village to which they were going, Jesus acted as if he were going farther. But they urged him strongly, ‘Stay with us, for it is nearly evening; the day is almost over.’ So he went in to stay with them. When he was reclined at the table with them, he took bread, gave thanks, broke it, and began to give it to them. Then their eyes were opened and they recognized him.” ~Luke 24:25-31

Jesus calls these followers on the way to Emmaus foolish and slow of heart to believe the Scriptures. “This is God’s design,” he says. “This is how it has to be!” And when he opens the Scriptures, it’s not just a couple of isolated passages or a few random texts. He explains all of Scripture to them, it says — the whole story! He tells them that salvation can only be found when God’s anointed Son takes on our suffering, when he takes the whole world’s suffering into himself, when he dies under the crushing weight of that sin and suffering, and rises again as the beginning of God’s new creation, God’s brand new eternal people. This is what had to happen, and now it has!

At the Lord’s Meal, Friday turns into Sunday.

Their eyes are opened when Jesus breaks the bread. They recognize Jesus at the table.

Now, allow me to say this about that:

Knowing the information is one thing. Getting the correct content into our brains, understanding the logic, engaging the truth with our minds — that’s very important. We shouldn’t neglect that. But let’s also nurture the emotional experience at the table. Let’s pay more attention to the tangible, touchable, tasteable proof we experience in the Church’s Meal.

The future reality of resurrection of us is experienced in the present reality of the risen Lord around the table. He’s here! He’s with us at the table!

Some days it can feel like our sin or the devil has more power than we do. Some years it can feel that way, I know. But we have direct access to the Holy One of God who has already overcome whatever Satan throws your way. He has already defeated everything the devil might possibly use against you. And we have direct access to him! We eat and drink with him all the time!