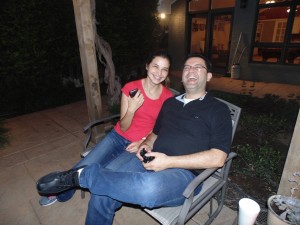 Our church family at Central has been so blessed to spend this month with our beloved missionaries in Brasilia, Junior and Patricia Lira. The Liras are on a working sabbatical (oxymoron, I know) here in the States and have used three weeks of it here in Amarillo with us before heading up to Tulsa this weekend. I think they’ve eaten Tex-Mex at least once a day since they arrived here. And they’ve received approximately 11,700 hugs and twice that many well wishes and kind words of encouragement.

The entire missions committee and our families gathered at Stanglin Manor on Monday for grilled fajitas and an extended time of prayer for Junior and Patricia, for the Kingdom work in Brazil, and for our relationship together in Christ. After sharing a massive meal, we listened intently as these two co-workers with God talked with us about their triumphs and their defeats, about their good times and bad in Brasilia. Church work is hard; I believe foreign missions work is exponentially harder. And our hearts became one with theirs as they discussed some of those struggles.

They both work so hard. And they inspire us. They are both so energetic, so enthusiastic, so visibly full of God’s Holy Spirit, and want nothing more than to be used by God for his eternal purposes. They challenge us with their lives of service to our Father’s Kingdom. 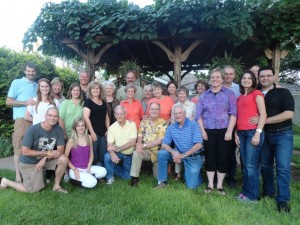 The highlight of the evening was getting Junior and Patricia in the middle of our living room and then surrounding them, on our knees before our holy God, laying hands on them and thanking the Lord and asking him to pour out his richest blessings on them. To listen and participate with these great men and women as they opened up their hearts to God and to one another was really the highlight of my week. 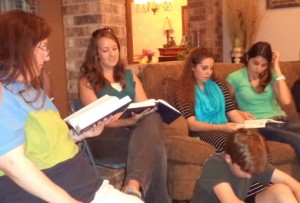 Until we got together for a dinner with the praise team last night at Michael and Connie’s and sang for more than an hour with Junior and Patricia. I’m not sure how Carrie-Anne and I got invited, but we’re so grateful. Singing songs of praise to our God in English and in Portuguese was an undeniable testimony to the power of his Spirit and the vitality of his Church. We laughed together as Dick and Lisa traded friendly barbs, we worked hard together to harmonize with Prentis, we sniffed tears of joy away as we sang It Is Well, and we stood together to sing The Lord Bless You and Keep You. After all seven “amens” we hugged and began all over again expressing our great admiration for and best wishes to Junior and Patricia.

It’s been a marvelous three weeks with these two great servants of our Lord. May our God bless them with strength and endurance, with energy and confidence, as they serve his Kingdom in South America. And may our God bless his people at Central to sacrifice and serve here in Amarillo in the selfless and joyful manner of Junior and Patricia.