The tops of my cheeks are red and my forehead feels crinkly. A little too much California sun, maybe. The Rethinking Arminius conference begins early tomorrow morning at Point Loma Nazarene University. But today was spent with Keith sight seeing and touring this beautiful city of San Diego. 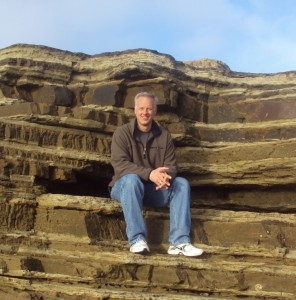 The day began with a four hour whale watching tour that took us out about 15 miles into the Pacific Ocean. We did manage to spot one whale, a Fin Whale, about three hours into the trip.  “There she blows!” Very exciting. The rest of the time was spent watching all the dolphins. Dozens and dozens of dolphins. We saw them everywhere. Huge pods of dolphins, swimming right toward our ship and then jumping right in front of the bow and gliding with us for four to five minutes at a time. Really amazing. And beautiful. And strange.

After lunch, we played with all the crabs and sea anemones in the tide pools along the coast. We hiked up to the old light house at the end of Point Loma and the Cabrillo National Monument. We climbed around on old U.S. machine gun dugouts that were hastily built and manned around the clock in the months following the attack on Pearl Harbor. And then we watched about 150 sunbathing seals (sorry; California Sea Lions) on the beach at what is called Children’s Pool. Really fascinating. To be up that close to all those sea lions. Watching momma seals swimming and playing with their baby seals. All those seals snorting and scratching and rubbing their backs along the rocks. Really amazing. And beautiful. And strange. 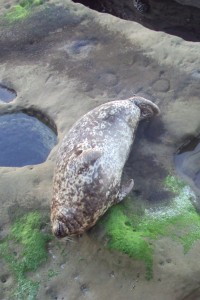 And then dinner at Miguel’s with Keith and four other renowned theologians from here at Point Loma, Calvin, Trinity, and Princeton. Once I recovered from the initial shock of being mistaken by one of the gentlemen for Keith’s dad (yeah, I’m seriously doubting this guy’s expertise and judgment on anything), it was a really nice time. Of course, they could have been talking calculus or quantum physics over their fajitas and enchiladas and I wouldn’t have understood the conversation any less. Great guys. A few laughs. But their language and topics and even their manner of dialogue was completely foreign to me. I kept waiting for somebody to say, “So what are the Rangers going to do this year?” or “I feel really strongly about a college football playoff system.” But they never did. It was about foreknowledge and Tillich and concurrency and Barth and certainty and Augustine and compossibles. I guess the conference started early for me tonight.