Dead on the Shore

“That day the Lord saved Israel from the hands of the Egyptians, and Israel saw the Egyptians lying dead on the shore.” ~Exodus 14:30

God’s people were trapped. This rag tag band of slaves was cornered. The sea on one side and the desert mountains on the other and the mighty power of the Egyptian army thundering over the sand ridges right toward them. They watched in horror as their violent doom descended on them. It was over. They were as good as dead and they all knew it.

But then our God showed his power and sovereignty over nature and history by splitting the sea right down the middle so every last one of these rescued slaves could escape the enemy on dry ground. God caused the waters to spill back over the Egyptians — all their chariots, their horsemen, their archers. Scripture says “not one of them survived.”

“And Israel saw the Egyptians lying dead on the shore.” 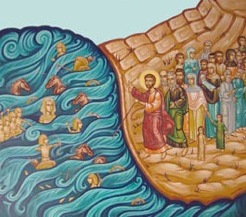 Their enemies were powerless now to ever do them any harm. Ever. The escape was complete. The rescue was final. Their salvation was secure. They saw it. They saw their enemies dead now and strewn lifelessly about on the shore like washed-up seaweed. They saw it. And they feared the Lord and put their trust in him.

I believe God caused his people to see their dead enemies for a reason. He wanted them to see it. He wanted there to be no doubt that they were truly saved. They were totally secure. All threats had been erased. All evil against them had been eradicated. They really were free and in the faithful and loving arms of their all-powerful God. This visible and indisputable evidence gave God’s people the courage they needed to move from Egypt to Israel. God was taking them through the waters of salvation to a brand new place and they all needed to know that it was OK to press on in faith. He was taking them from one country to another. He was changing their story. They are no longer slaves; they are now the children of God. “The water flowed back,” Scripture says, cutting off thier connections to Egypt and their old way of life, their old story. They would only press ahead now, into the brand new story of freedom in YHWH, of salvation in the Lord.

As Moses and Miriam are leading the people in songs of praise to God for his mighty and final deliverance from their enemies and from their old horrible lives of slavery, it would have been impossible to imagine that within just a few weeks those same people would be begging to go back to Egypt. When things got difficult, their first instinct was to go back to Egypt. Their old lives were miserable; but they wanted to go back. Their old stories were terrible; but they longed to jump back. It was awful; but I suppose it was comfortable. Maybe. I’m not sure what made them want to return to Egypt back then. I’m not sure what makes us want to keep going back today. 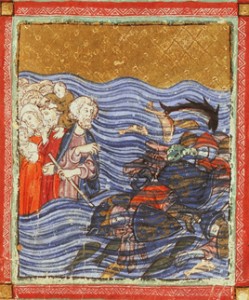 Some of us are living the wrong story. We’re all on the other side of the Exodus. We’ve all crossed over from slavery to sin and death to a brand new life as God’s eternal people in complete subjection to him. In Christ, we’ve moved out of one country and into another. But some of us are determined to pass through those waters back to Egypt. Some of us are working for things and chasing dreams that the world says are important. And we’re not satisfied. We’re restless. Some of us are depressed or despondant because we don’t have the status or the security that our world says is so valuable. We’re unhappy. Some of us are living the story the world says is our story instead of the brand new story we’ve all been given by our God.

The enemies are dead on the shore! Do you see them? Our Father wants us to see those dead, lifeless, completely conquered enemies! In Christ, he has totally destroyed sin and death and Satan and all the things that might separate us from him. The pain, the past, the failure, the anxiety — all of it is helpless against our God. He’s already drowned it out in the salvation waters of our baptisms. It’s over! Whatever had so messed up our stories is gone now. In the promised Messiah, God has given us an eternal victory even more decisive than what the Israelites saw on the shore.

That’s our story. Our story is about the power of our God who acts in mercy and grace through his Son to deliver us from our enemies and bring us into a brand new life as his brand new people. Our identity is completely changed. Our values are totally different. Our story is radically transformed. Because the Kingdom we serve is not of this world. And neither is the King we worship!

May we be a people of the correct story — the story of salvation from God, not the story of fate and chance that comes from the world. And may that salvation story shape us by God’s grace into the holy people he has called us and saved us to be.