I have a new phone. Actually, it might not be classified as new by today’s standards — I bought it in April. I’ve had it for a little over three months now and I’m still getting used to its nuanced quirks. There are some subtle differences between this phone and the one I had for four-and-a-half years that quit working on me. Overall, though, I like this new phone. Why does everybody else seem to have such a problem with it? 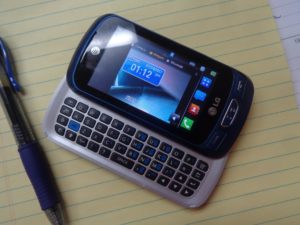 Yes, my new phone is a “slider.” Yes, they still make the “sliders” and, yes, you can still get one if you’re committed to it — you have to be persistent, you have to be able to withstand a lot of criticism and ridicule, you have to answer a lot of questions, and you have to wait three to five business days for delivery.

As long as it is humanly possible, I refuse to own and operate a smartphone.

For a couple of years now I’ve wanted to use this space to discuss the many reasons I choose to avoid the smartphone. I’ve hesitated until now because most people who question me about my choice don’t really seem interested in a conversation. They seem only concerned with gawking at me and my phone as if they’re staring at a creature from another planet or with brushing off my choice as utterly ridiculous and beyond human understanding and, therefore, not worth their time or energy to engage.

Two things have happened that have energized me to now write about my aversions to the smartphone. One, my experience at the ATT&T store when I ordered my new “slider” and the subsequent disbelief and derision from my friends and family seem like something that should be acknowledged and questioned. It’s constant; it gets worse instead of better; it’s really quite remarkable. Second, my brother, Dr. Keith Stanglin at Austin Graduate School of Theology, after years of avoiding the smartphone due to convictions we share, just recently broke down and bought one — he claims to have been forced into the switch, I call it a lack of integrity. Keith has published a provocative post on the Austin Grad blog regarding his personal concerns about smartphones — again, concerns he and I share. He raises interesting questions about their impact on society and on the Christians living in this society that need to be engaged seriously, if not answered.

I encourage you to please click here to read his article. He argues convincingly for the debate about smartphones to, first, be a debate, not a foregone conclusion; and, second, that the debate be one centered on the use of smartphones as an ethical issue. Check it out— you won’t read a more thoughtful critique on the smartphone from a Christian perspective.

Then, using parts of Keith’s post as a conversation partner, I’ll spend the next three days here outlining my own concerns and questions. Tomorrow, I want to ask why people feel so compelled to judge and/or make fun of those who don’t use smartphones — why all the hate? Wednesday, I want to consider if smartphones make us better people or worse people, if they cause us to be more like Christ or less like Christ. They’re not neutral. Nothing’s neutral. Finally, Thursday, I’ll address the issue of enslavement to our phones. It’s futile to suggest these phones do not own us. They do. So, what do we do about it?

To borrow Keith’s words, I’d like to use this space this week to infuse into our less than ideal phone realities a measure of perspective and good sense. Read his post, maybe even on your phone, and come back here tomorrow.