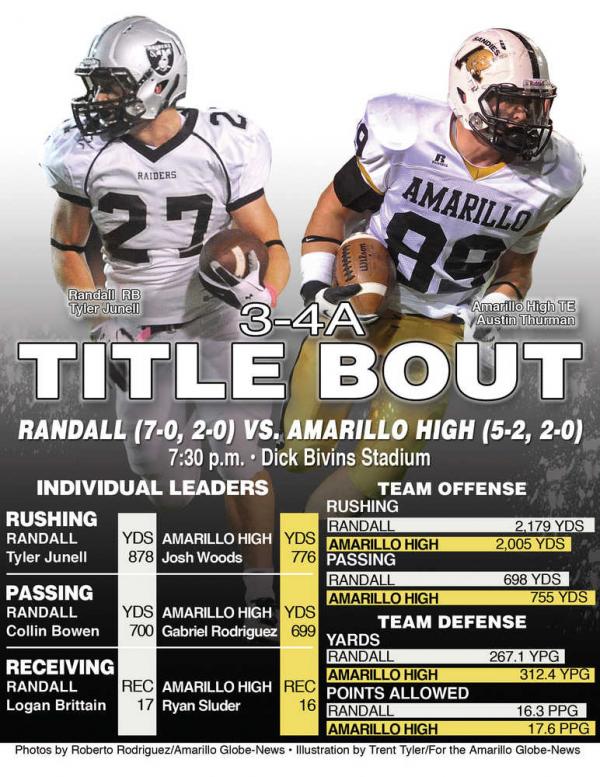 The cold front arrived at 3:25 this morning. I know because the acorns falling from the oak tree on the west side of the house and slamming into and rolling off the wooden shingles above our bedroom sounded like an apocolyptic hailstorm. It’s cold today. The temperatures and the north winds are both in the upper 30s. We’re going to freeze at the football game tonight.

Amarillo High and Randall play at Bivins tonight in the Battle of Bell Street. The only two undefeated teams in District 3-4A, separated geographically by just five miles along Bell, have never been in the same district. In fact, they’ve only faced each other a total of six times in football, the last time in 2009. What a way to renew the rivalry! The Raiders are coming off back-to-back ten win seasons and third round playoff appearances. The Sandies boast the best running game in the region and a serious defense. Randall’s offense, quarterbacked by Central’s own Collin Bowen, can both run and throw with the best in the area. The district championship is on the line tonight, and the two teams are worthy of the matchup.

I feel like half of our church is going to be at the game this evening. It’s definitely a community event just because of the caliber of the teams involved and what’s at stake. But half the skill position players for Randall are Central kids while Amarillo boasts our Blake Borger at starting right guard and half our youth group in the student body.

Z Z Top is actually playing at the downtown Amarillo Civic Center tonight. I love Z Z Top. But this is the game everyone’s had circled on the calendar since mid summer. And the two teams have lived up to expectations. We’re going to freeze tonight. But I wouldn’t miss it for the world.

(AHS beat Randall 35-28 in OT. Collin and Logan almost won the game for the Raiders by themselves — Logan had 162 yards on five long catches. But Collin had a tipped pass intercepted on Randall’s first drive in OT which led to the Sandies’ winning score, a four yard run by Josh Woods. Click here to read some game summaries.)