Back To Their Own People

“On their release, Peter and John went back to their own people…” ~Acts 4:23

Please notice that in the middle of terrible trial and increasing persecution, the apostles who’d been arrested and questioned for preaching and teaching in the name of Jesus “went back to their own people.” They gathered with their brothers and sisters in Christ because they knew the fellowship of the saints is a tremendous source of encouragement and strength. Fellowship is one of the main themes in Acts and we shouldn’t be surprised that it comes to the front during this time of crisis.

When their God-given mission was declared illegal, Peter and John shared and prayed with their own people.

You know, the more technology we use, the more TVs and computers and laptops and cell phones and iPods — the more screens we bury our faces in and the more buds we plug in our ears — the less relational we become. Being with other people, interacting with other people, sharing and praying with other people is becoming less and less important. One of the saddest developments is that our relationships are deteriorating and they weren’t all that strong to begin with. The result is that God’s Church is ill-equipped to handle a crisis.

There is terrific strength in being together. It’s critical for us to be together where we can encourage each other, build each other up. sympathize and pray for each other. We strengthen each other when we’re together. I don’t know why anybody would ever miss one of our regular church assemblies. It’s so vital! 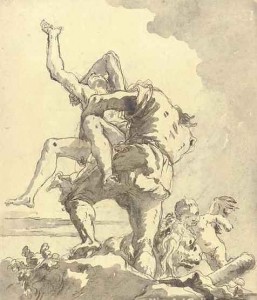 In ancient mythology, there’s a story about Hercules wrestling to the death with a Libyan giant named Antaeus. Antaeus was the son of Gaia, the goddess of the earth. And everytime Hercules threw Antaeus to the ground, Antaeus jumped up bigger and stronger than before. Hercules finally realized that everytime Antaeus came in contact with the earth he received fresh power, renewed strength. So he picked Antaeus up and held him in the air. He didn’t allow any contact between Antaeus and the source of his strength. And eventually Antaeus grew weaker and weaker and died without a struggle.

I think Satan knows the strength we get from being together. I think that’s why he works so hard to keep us from all meeting together. He’s the one who gives us our excuses and rationalizations and justifications for missing our meeting times. He knows if he can just hold us away from the assemblies, if our gathering with other Christians is inconsistent or non-existent, if he can just hold us in the air long enough, our spiritual condition and readiness to face a crisis won’t be nearly as strong as it is when we’re always together.

There’s great strength in being together.

I’ve had the great privilege of listening to Ben Witherington teach and preach and sing on the great salvation themes of the New Testament. The noted theologian and author has presented his views on Revelation to a hundred of us at the Sermon Seminar at Austin Grad. And I was blessed to spend an entire day with him at Harding last year, thanks to an invite from my brother, Keith. Now, the boisterous and bellowing one has been inspired by the unbelievable World Series to write a few paragraphs about the great game of baseball. It’s a little Cardinals-biased. But it’s a good read. You can get to it by clicking here.