Does anything compare to the utter shame in what happened in the seconds immediately following last night’s three-point loss to the Eagles? 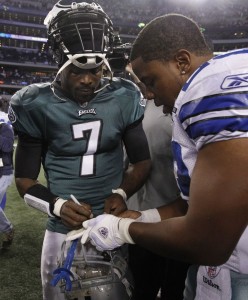 It happened right at midfield, just a few feet from the giant Cowboys star that, at one time, was worth defending. After a gut-wrenching home loss to the hated division rival Eagles that officially eliminated Dallas from postseason contention, there was Cowboys running back Tashard Choice chasing down Philly quarterback Michael Vick for an autograph. Like a star-struck eight-year-old, thrilled to death to just be in the presence of such greatness, Choice beamed wide-eyed at Vick as he scribbled his name across Choice’s extended glove.

I hit the backup button on my DVR and watched it four times before I could really comprehend it.

I understand I’m not a young man anymore. I know it. I hung our Christmas lights on the house Friday and my legs are still killing me today. And I know I sound like an old man when I criticize Choice for his ill-timed request of his conquering foe. But, good gravy! These are not the Cowboys I cheered for as a kid. The Cowboys I cheered for were led by Harvey Martin, who once threw a funeral wreath into the Redskins locker room after a division-clinching win. They were captained by Dennis Thurman, whose “thieves” once famously broke up the Washington Fun Bunch in the Texas Stadium end zone. Cliff Harris wound up on his rear end, but he didn’t let Jack Lambert push him around. Jimmy Johnson chased down Buddy Ryan to give him a piece of his mind after a game in ’89. When Joe Theisman ran around in the back of the end zone to run time off the clock before kneeling for a safety in a 9-5 win, Charlie Waters almost decapitated him. George Teague did his thing to T. O. long after I stopped rooting for this team, but I appreciated his attitude.

Tashard’s autograph request was an all-time low. His explanations and excuses are running a close second. I was bothered by the ho-hum reaction to DeSean Jackson’s pirouette and Nestea iced-tea plunge at the one-yard-line during what turned out to be the game-winning touchdown. Terrence Newman and Gerald Ball just stood there. But I’m more disturbed to think that while the Cowboys offense was gathered on the sidelines in the closing minutes, hoping for a final shot to win or tie the game, Choice was busy looking for a pen.

Over the past five weeks, I’ve found myself secretly hoping for success for Jason Garrett. If he’ll send Choice to the “asthma field”  this week for his nationally televised post-game brain-lock, Garrett might could win me all the way back.