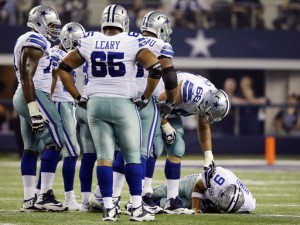 When it comes to the Cowboys, if I can’t say anything ugly I don’t say anything at all. And I don’t mean for this post to be overly ugly or overly critical of last night’s escape over the Giants at the Death Star (the only Ticket Schtick you’ll ever see me use). But after a full day of exulting in the season-opening division win, overly-optimistic Cowboys fans who believe this team is capable of finishing over .500 need to be reminded today of what really happened last night.

Allow me to re-cap in the form of a few questions:

~How in the world, six minutes into the first quarter, do the Giants have three turnovers and the Cowboys only have three points? And zero first downs?

~How in the world do the Giants turn the ball over six times, yet at the two-minute-warning are poised at mid-field, with the ball, trailing by one score?

~How does Romo give up a 91-yard interception return that only results in three points for New York?

~How does Eli Manning throw for 450 yards and four touchdowns and still lose?

~How does the Dallas offense only score two touchdowns and still win?

~How does the Dallas defense give up more yards than all but two teams on the NFL’s opening weekend and still win?

It boggles the mind. So many things had to break just right for Dallas to squeak out that win last night. Believe it or not, it’s the first time in team history that Jason Witten has caught two TD passes from Romo in the same game. I mean, that kind of weird had to go down for the Cowboys to win. But I wouldn’t see it as a changing of fortunes. I wouldn’t view what happened last night as the new rule. I wouldn’t predict anything about the next 15 games based on last night. It was just a case of pure, dumb luck.

Don’t tell me a team causes its own luck. It’s not that I don’t believe it; I know teams cause their own luck. The very best teams are always the luckiest teams, and that’s not a coincidence. But that’s not what we saw last night. Everything about what happened last night goes against NFL logic, against football wisdom, against gridiron history, against NFL numbers and stats. What happened last night was an aberration.

Most of you Cowboys fans already figured next week’s Chiefs game to be an automatic “W.” My word, they were even worse last year than their 2-14 record would indicate. But, another thing that happened yesterday, of all the opening weekend games, was Kansas City posting the largest margin of victory.