It means, “Let’s go!” in Hebrew. “Yala!” And we hear it a hundred times a day in Israel from our wonderful tour guide Anton and our super-skilled bus driver Gesan. We’ve arrived at our destination, “Yala!” It’s time to load up and go to the next place, “Yala!” We’ve conducted the head count, we’re all here, “Yala!” We’re running behind on our schedule, “Yala!” And by now, day three of our sight-seeing tour in Israel, we’re all saying it. For everything. It’s time for the meeting, “Yala!” I’m going back for more dessert, “Yala!” 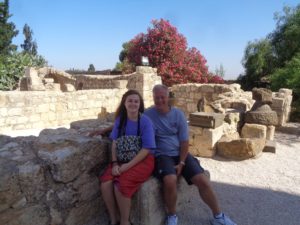 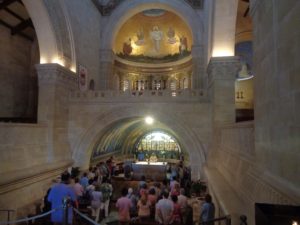 I may write more about our bus driver later, but I’ll give you this now: Our Lord said it was impossible for a man to drive a camel through a needle; but that was before he met Gesan.

We began our day with a treacherous ride in three taxis to the top of Mount Tabor, the supposed site of Jesus’ transfiguration. I’m increasingly convinced of the authenticity of this place as the true location of the divine revelation of Jesus with Moses and Elijah. Both historical and traditional evidence keeps rolling in. We scoped out the walls of the fourth century church and the baptistry that was built there and toured the current Franciscan church that was erected there in 1921. 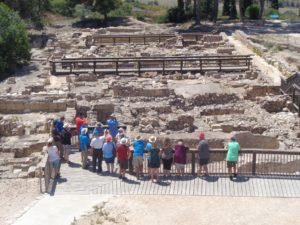 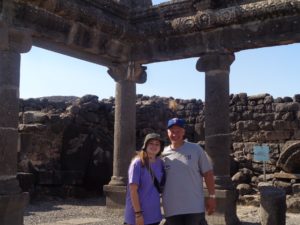 We also spent some time in Nazareth, ate a picnic lunch under ancient olive trees at Sepphoris, and hit the ruins of Chorazin, the fishing village on the north side of the Sea of Galilee that Jesus famously condemned.

Because today is Sabbath, the roads were mostly empty and we had the sites mainly to ourselves. Of course, that also means the little store next door to our hotel is closed so I can’t find any caffeine. But we had another great day in Israel. We leave the region of Galilee tomorrow for the Negev Desert where, hopefully, it’ll be a little cooler than the 105 and 107-degree days we’ve had up here.